Derrybeg: an estate with a multitude of memories 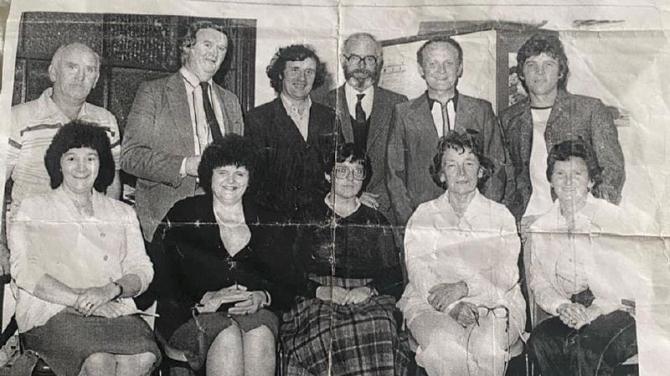 By the late 70s Derrybeg was turning into a ghost estate as over 90 of its empty houses were boarded up, nearly a third of its total.

Young children were constantly being hurt as they explored the empty houses and on one occasion two young people had received serious injuries when there was a gas explosion in an empty house in Second Avenue, an explosion that blew part of the roof off.

But despite numerous appeals and petitions by the tenants association to the Housing Executive nothing was done to stop the rot. The residents were now of the opinion that the Executive was unable, or unwilling, to save the Estate from further decline and when the Executive posted a notice in its office to the effect that no points were required to obtain a house in Derrybeg, the residents saw this notice as the final straw that added insult to injury. It was then decided that a protest would be held at the Housing Executive office to demand that the offending notice be removed as Derrybeg had been demonised long enough by the media and by sections of the Council. About two-dozen residents attended the protest, but the Housing Executive management refused to meet the delegation that consisted of Davy Morley, Dessie McGennity Bernie Hughes, Esther Campbell and Mary Campbell. On hearing of the management’s refusal to discuss the matter the rest of the protesters crowded into the offices and literally took over the ground floor of the building.

After about an hour the RUC arrived to clear the building of the protesters, but this only made the situation worse as scuffles broke out between the police and the protesters and word soon spread to Derrybeg of the confrontation, with the result that more and more residents joined the protest.

The police then withdrew and after a four- hour sit-in, the management agreed to remove the offending notice and promised that a bigger effort would be made to improve the image of Derrybeg, but it was to be many years later before they honoured that promise.

This encounter at the Housing Executive was a far cry from the happier times, 16 years earlier when houses were like gold dust in Derrybeg in 1963, when the estate was opened, it was a privilege to be granted a house there. Over 340 families had been allocated homes in Newry’s showpiece estate and, as they came to terms in meeting their new neighbours, great friendships built up between them, friendships that were to last for many years. The new residents came from all walks of life and as most of them were young, it was an experience to have a house of their own away from the in-laws and bed-sits that had been their home before Derrybeg was opened. Though on the negative side there were no play areas for children, and the teenagers and adults had to make their way into the town for a social evening in all sorts of weather and on foot too, as there was no transport available.

Still, Derrybeg was well catered for with shops. Peadar Markey had a newsagent’s, Louie Sweeney owned the grocer shop and John Ruddy had a butcher’s shop and there was also a children’s clothes shop. Yet there was only one public telephone to serve the whole estate and that was usually out of order. Very few residents had a private phone in those days, but one of those belonged to Colum Mathers of Second Avenue and thankfully he always made his phone available in emergencies. We were lucky to have such good neighbours in those bygone times and it’s nice to meet them occasionally to yarn about the old days.

In 1965 a committee was formed to run the football team. Billy Scott was elected as chairman with Joe Campbell as secretary. Bobby McAleavey was appointed treasurer with the rest of the committee consisting of: Dessie McGennity, Joe Campbell, Genie Maginniss, Mervyn Preece, Mickey Clark, P J Cunningham, Jim Dalzell, Johnny McCaigue and Joey McLoughlin. The team was to be called Derrybeg Athletic and would play in the newly formed Newry Winter League. A raffle would take place each week to buy a football strip and the three prizes were: a hamper, a bag of coal and a chicken. Sellers would go round the houses with the raffle tickets and almost all homes bought these tickets at sixpence each. These prizes were much sought after, as times were hard in those days. The raffle took place every Saturday morning in Markey’s shop and there was always a good audience present to observe that everything was above board. Though, after the draw was made you had to listen to wise cracks like “that lucky oul b*tch won again - and her husband has a good job too” or “I’m glad I didn’t win the chicken as there is more meat on a sparrow”. Nonetheless everyone supported the raffle each week and as the funds grew thoughts turned to the possibility of building a social club, not just for the football team, but for all the residents of the estate as well.

A meeting was arranged with Gerard Cronin, the Town Clerk, and the proposition of building a social club in Derrybeg was put to him. He thought it was a good idea, but he pointed out that all the red tape and legal work would have to be gone into first and this would take some time, but he promised to do all he could for the idea. A few months later he contacted the committee and informed them that the go ahead had been given and permission was granted to erect a club building on the open space behind Second Avenue - and that a 99 year lease on the land had been granted. It was great news for the residents, but the committee had little funds to build a social club and many thought that it would take years to raise the money to realise their dream.