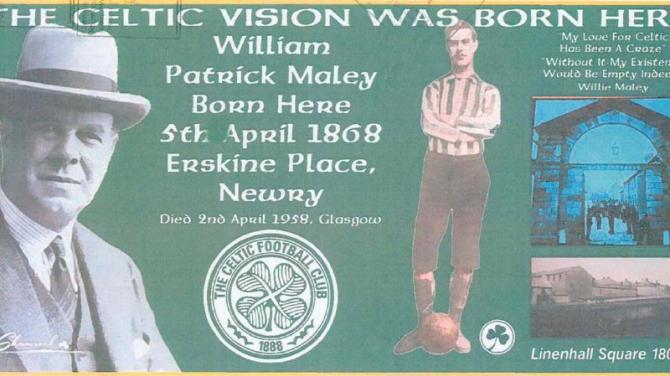 CELTIC football club's first and arguably greatest manager of all time is due to be honoured in his birth place of Newry as new giant murals are given the go-ahead.

Planning consent has now been granted for a mural to be erected on two gable walls on houses at Erskine Place (5mx2m) and Mourne View Park (7.5mx3m) in Newry as a memorial to the legendary Willie Maley (25 April 1868 – 2 April 1958) who was born in Linehall Square Barracks on April 25, 1968.

The planning application was made by the local Linenhall Area Community Association who are also advocating a statue of the Celtic manager to be erected in the city.

Newry councillor, Charlie Casey, a lifetime Celtic fan spoke to the Democrat this week as the news of the much sought after planning permission was finally given the go ahead.

“I am delighted to hear that the planning permission has been give after we have had to over come many hurdles in the way,” said Mr Casey.

“There was quite a hold up at the start, but ow we are good to go.

“We now wait with baited breath for the painting of the murals to begin, which will be greatly welcomed in the local community,” he added.

From his early days in Newry, Willie Maley went on to become a player and Glasgow Celtic’s first manager, a position he held for 43 years. During that time he won 16 league championships and 14 Scottish Cups.

The new murals on aluminium sheets, will be placed be on a grand scale display on the side of the two properties showing images of Maley in both his managerial and playing roles as well as an image of the old Linenhall Square in Newry back in the 1800s.Also on display will be the Glasgow Celtic FC crest and a quote from Maley proclaiming: “My love for Celtic has been a craze. Without it my existence would be empty indeed.”

The supporters of Celtic in Newry will now be putting their focus on achieving the murals as soon as possible, so that they can get behind the campaign for a statue of Maley to be put up in the city.

“The murals are a precursor to the statue campaign, which has gone on for some time and even seen members of the old district council contacting Celtic directly,” explained Mr Casey.

“Unfortunately, at the time the club told us that we would have to organise the statue ourselves.

“So that is what has been happening for the last number of years.

“We now have three sites located in Newry.

“I myself would like to see the statue closer to where Maley was born, but it seems that it might be too much out of the way and hidden.

“It now looks like a more central location will be agreed that will allow local people and indeed tourist and Celtic supporters to see Maley recognised in the town of his birth,” added the councillor.