The 4 Of Us Exclusive Interview- Lockdown gigs spark new single 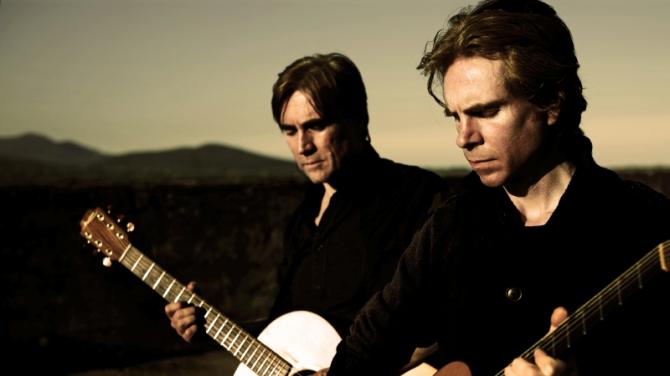 NEWRY'S most famous siblings The 4 Of US have come out of Covid lockdown gigging to the online world with a brand new single hitting the sound waves.

Vocalist Brendan Murphy and guitarist, brother Declan have spoke to the Newry Democrat this week in an exclusive newspaper interview ahead of the global launch the highly anticipated song, 'Waiting Game' and a hint towards their upcoming latest album.

“The song is called Waiting Game and it is about how the past 12 months has affected my own family,” Brendan told the Democrat.

“One of the few upsides (of the pandemic) has been that we have had a chance to spend more time together.

“The song actually came about through the weekly live show.

“In fact the video for the song is a compilation of clips from the live sessions,” he added.

During the Covid lockdown, the sibling duo have been holed up on the shores of Carlingford Bay where they have been attracting audiences of 20,000 fans each week going back in time with performances from legendary albums from 'Songs for the Tempted' to 'Man Alive'.

“We started doing the online gigs in October 2020,” explained the lead singer.

“Due to the pandemic we had been off the road for six months at that stage.

“We just really missed connecting with the friends who had been going to see us play live over the years.

“It was initially a way to catch up. The shows were called 'Ask Us Anything' and the first few were just us having fun answering questions, but then requests for our songs started coming and the show turned into more of a live session.

“We thought we might just do a couple, but we enjoyed them so much that we just kept going.

“It’s very social, which we love.

“Our community who turn up every week are the real stars of the shows.

“Most of the time we are just reacting to the comments coming in live on facebook or YouTube.

“We have done 28 shows now. It’s been great for us because it’s allowed us to play songs that don’t make our live set and to introduce new songs we are currently writing for our next album.

“Over 20,000 people a week are tuning in either live or watching the replay which is pretty surreal. Last week we had comments coming in live from Italy, Estonia, New Zealand, Seattle and Newry,” said Brendan.

The boys from Courtenay Hill have come along way in the music business with tunes that have been played out all over the world such as 'Oh, Mary' and 'She Hits Me' to name but a few.

The Newry performers have even been sought out by none other than Led Zeppelin God of Rock, Robert Plant with his new band 'Saving Grace'

The brothers Murphy took the stairway to the stage with Plant on an Ireland tour in 2019, now cherished as one of their many special memories that they share on their online gigs each Thursday night at 8pm.

Though the streaming gigs have presented some more weird and wonderful questions to The 4 Of Us, that will have you wondering next time to wash the dishes at home.

“We were previewing the new single Waiting Game on the show and Declan was explaining how he wanted to get handclaps on the track,” said Brendan.

“He had heard that if you wear rubber gloves while clapping it records much better and showed off his pair of Marigolds.

“The comments came flying in and more than a few people requested that we stock them as merchandise in our shop.

“We normally have a glass of wine during the show, but Declan gave up alcohol for Lent and it was great craic seeing all the comments coming in during that period.

“Every week people tuned in to see how he was holding up, or to give him a bit of gentle ribbing. “Needless to say he stayed the course,” he added.

The shutter have since been drawn up across the North as businesses started to get back to serving customers food and drink and sell their wares.

The spirit of freedom is now in the air after four months of the latest lockdown, which everyone wants to be the last.

Perhaps a summer time offering might even be in the wings for The 4 Of Us, with many local fans craving a Newry outdoor gig spectacular.

“Newry will always be home. I have so many great memories of growing up there,” said the singer.

“Even when I went to Queen's University it felt like a lot my fellow students were from Newry.

“I live close by in Carlingford, but I still travel to Courtenay Hill every week to see my mum.

“As soon as it is safe for our audience we will be playing shows.

“We are really looking forward to getting out there again,” said Brendan Murphy.