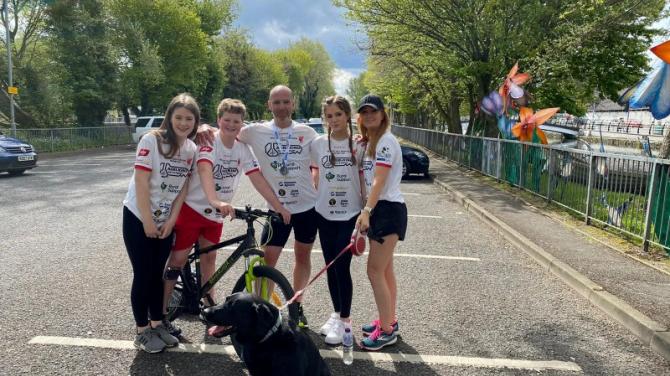 ALAN Lockhart, an Agronomist and Ruminant Nutrition Advisor from Co. Down recently participated in the Belfast City Half Marathon to raise funds for Rural Support.

Speaking about his reasons for doing the fundraiser, Alan indicated that he has seen first-hand the strains and pressures that are faced by farming families due to financial, weather and personal family issues which can have devastating impacts, and he wanted to give something back to the farming community.

An avid runner and inspired by his wife, who is noted as his main support, Alan runs not just to improve his physical health but for the pure head space it provides him to process his feelings and experiences, particularly after a stressful day.

Working in a pressured role, Alan said “I am sure that people that meet me coming the other way think I have a screw loose but the importance of being able to do this has helped my mental health no end”.

Alan had thought about running for charity for some time but wanted to choose a home-based charity where he could see how the money helps practically and that was linked closely with the farming community that he works with daily.

Speaking about the reasons he chose Rural Support as his nominated charity, Alan said “Northern Ireland farmers are the salt of the earth, you would be hard pushed to find another group as unique, for all the bad times the industry has faced and continues to adjust to there is always that sense of determination to persevere which is a very discerning quality to possess. Rural Support are there to provide support to that community, so it made sense to choose them as my charity”.

Alan considers himself privileged to have been born onto a family farm steeped in history since 1600’s and is the 12th generation to have lived and worked the land on the farm and hope his children will carry on that tradition.

His passion was fuelled by his Grandfather’s brother, Jim Lockhart who co-wrote the book “Lockhart and Wisemans Crop Husbandry & Grassland.” For almost 20 years he’s worked with farmers mainly in Armagh and Down trying to help them achieve more from the land base they farm from an agronomy point of view.

Alan says, “mixed farming enterprises are the backbone of Northern Ireland farming systems and to focus on the soil, crop rotations and use of on farm manures to grow excellent quality forages has been my unchanging message from day one”.

His own cropping experience fits hand in glove with his nutrition role as high quality crops are grown as feed for cow health, longevity and ultimately profitability.

Given what is clearly a very busy schedule, Alan said about his work-life balance “I find it strange that even though growing crops is what I love doing there is an enormous sense of self-imposed pressure that I have big shoes to fill” and says he “can only imagine that many farmers and young successors feel this way and the stress can often be quite nauseating even if it can’t be shown”.

When Alan was growing up there were pressures in farming, more often than not attributable to the same weather struggles and poor prices faced today but much less to do with the excessive compliance legislation that currently hampers farm businesses.

Like most young boys without a care in the world, the only thing on his mind was getting into the tractor with his Dad, he recalls “if I wasn’t sitting up on the tool box in the cab beside him, I was lying sleeping behind his seat, to me he wasn’t just my Dad, he was my best friend, in fact my hero, and at that stage my outlook for the future was to be a mirror image of him”.

However, tragedy was not far away and at the age of 34, Alan tragically lost his Father, then both his Grandparents within three weeks of each other followed by his sister who had been battling cancer, which had been diagnosed after their father’s passing.

Understandably, this was a lot to process in such a concentrated period of time and it was a very difficult experience to go through.

Alan said, “Thinking back on it now, whilst it seems like only yesterday, it all just seemed to happen one after the other and it was like being on a conveyor belt with no way off”.

When Alan was told about the mentoring and the recently introduced counselling services available for farming families through Rural Support he understood immediately the importance of having these services readily available.

Alan stated that in his experience “having a stranger to talk to or even just someone who would listen was a help” as “just having someone there from a neutral standpoint without bias was a fantastic pressure relief valve” and he recommends that should the opportunity present itself in unfortunate circumstances to grab it with both hands.

Alan says he “can’t stress enough how important such a service can be, even when you do not appreciate it at the time”.

Alan has been raising money through his Just Giving page but raising awareness of the issues impacting our industry and the farm families who work tirelessly is just as important. The aim is to get the conversation started, specifically on the often seen as taboo subject of Mental Health and to get help to the people who need it most and perhaps even more importantly when they need it most.

If you or someone you know would benefit from speaking to a Rural Support volunteer, please ring our confidential helpline on 0800 138 1678, available 9am-9pm, Monday to Friday (voicemail and support options available at all other times).  Rural Support could help you to find a way forward.