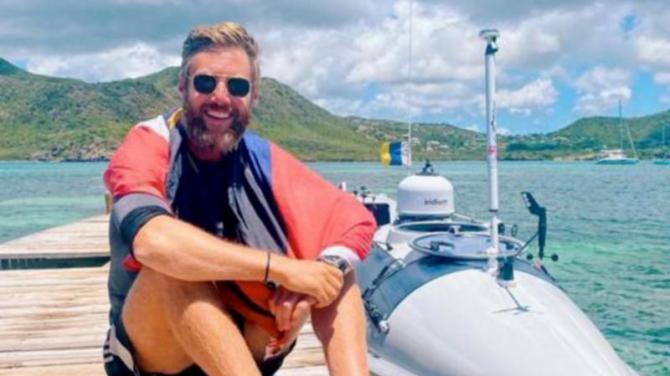 A KILKEEL adventurer and travel blogger has rowed into the record books after travelling 3,200 nautical miles across the Atlantic Ocean.

Former Kilkeel primary and high school pupil, Johnny Ward has just completed an epic four man rowing challenge from the Canary Islands to Antigua in the Caribbean from March to May.

Self made millionaire blogger, Johnny slogged across the ocean with fellow rowers Billy Taylor and Martin Heseltine, as well as professional skateboarder and celebrity chef Matthew Pritchard.

The crew had to undergo a gruelling schedule of rowing for two hours and sleep for two hours in a four-hour cycle for the past two months.

Needless to say, Johnny told the Democrat this week he was glad the “brutal” and “joyless” adventure was finally over.

“It is easily the hardest thing I’ve ever done, without a doubt, there is no real comparison,” he said.

“It was not the most dangerous, or the scariest as I've been in paces such as Somalia and Uganda.

“It wasn't the biggest physical challenge either as I've done ultra Marathons in places such as the Sahara desert and cycles that have left my backside bleeding.

“But mentally, living for the last few months with three other men in a space that would be like living under your dinning table, it was brutal.

“There was just no enjoyment in it.

“I thought it would be more difficult on your own, but I think if I was to may be cross the Pacific next, I would do it on my own,” he added.

The world has certainly been his oyster with Johnny leaving Kilkeel after his education to teach English in Asia almost 15 years ago, has now gone on to become the first Irish man to visit every single country in the world.

The multi-millionaire blogger has also generated his own adventure company, ‘OneStep4Ward’ where he regularly leads groups of keen travellers to locations all across the globe.

“I am proud to have completed the expedition and appreciated the opportunity for the endless time to reflect on my life, my past and my future,” said the Kilkeel man.

“As a whole experience, however, it was undoubtedly the most challenging of all my travel adventures to date.

“The relentless lack of sleep and discomfort, the isolation, was just so tough to take.

“When your mind starts to run and see that you’re going to be on this boat for weeks and weeks, it was tough to deal with.

“Focusing on the next two-hour session was the key, but in weaker moments, it wasn’t always possible.

“I had to row over 600 hours in total, so every six hours was one per cent.

“I just kept tallying it up. Bite-sized samples made it, just about, bearable.

“I also had the most delicious chocolate pudding after my sunset shift each evening, so that was always something to look forward to.

“To spend so much time with three strangers was strange, but we gelled really well thankfully,” he said.

“We will all definitely remain good friends after this experience,” he added.

The unique rowing challenge was completely plant-powered, with each of the men who rowed the boat adopting a plant-based lifestyle as well as raising funds for mental health charity, Humen, and Dean Farm Trust, an animal sanctuary, to showcase how cruelty-free choices are possible.

Already having returned back across the pond, Johnny is not resting on his laurels , but planning his next adventures even in Covid times.

In November, I’m running a group tour to run the Serengeti Marathon with my mum to raise money for Parkinson’s and my non-profit MuditaAdventures.com has a school build in the Philippines I’ll be going to in the winter too,” said Johnny.

“I will soon be going back to my now home in Thailand where I am having a house built.

“I will also be making time for a wedding ceremony with my wife Jaa.

“We got married just before the rowing, but we still have to celebrate. It'll be a small event due to Covid.

“My mum will be coming over and she will unfortunately have to spend 14 days in quarantine and I guess only a mum would do that,” laughed Johnny.

You can check out updates on the Kilkeel globetrotter and his adventures on Instagram @onestep4ward.