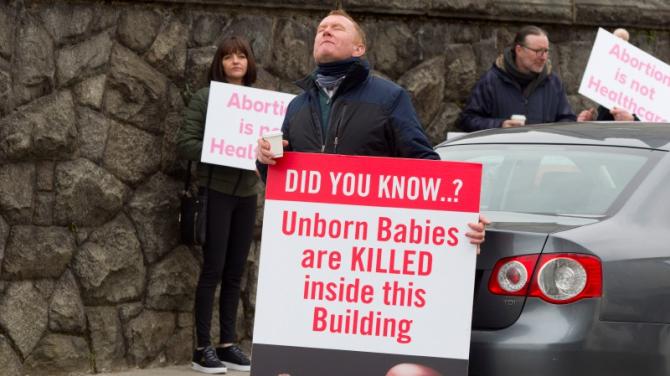 Bernadette Smyth's assertion comes in response to a Notice of Motion by Newry Mourne and Down District Council's Slieve Croob representative, Councillor Róisín Howell, which reads: “This Council believes that any member of the public accessing healthcare services is entitled to do so free of abuse, fear and intimidation and will write to both the Health Minister and the Justice Minister asking them to take steps to ensure this.”

Replying to that, Ms Smyth told The Democrat, “Abortion is not healthcare; it results in the death of an unborn baby and physical and emotional damage to the mother.

Ms Smyth continued, “There is always a PSNI presence when pro-life groups are outside abortion centres. The PSNI already have adequate powers to deal with any 'abuse, fear or intimidation' were that to take place.”

“Exclusion zones“ are discriminatory as they would only target pro-life groups. Freedom of assembly and of expression are fundamental human rights protected under Articles 10 and 11 of the Human Rights Act.”

Contrasting this call for a clampdown on pro-life protestors, Ms Smith cited Sinn Féin's own record as a Party given to protest.

She said, “Sinn Féin have supported - and taken part in – countless protests about various other issues for decades. Those who they protested against might also say they felt abused, fear, or intimidated.”

She contined, “In statements to the media, Sinn Féin have described signs and posters used by pro-life groups as 'distressing, horrific, graphic images'. However, many other organisations use 'graphic images'.”

Listing several such examples she said, “Animal rights activists use graphic imagery. In 2019, PETA - People for the Ethical Treatment of Animals - staged a demonstration in which its activists barbecued a 'dog' as part of a campaign to encourage people to go vegan.”

Ms Smyth continued, “The Department for Infrastructure has used graphic images in road safety - ads which show people lying in the road with blood pouring from their heads

“Even the government has launched a set of hard-hitting new adverts warning people to stay home to ensure people obey lockdown rules during the Covid pandemic. The adverts, which have appeared on bus shelters in public streets, show close-ups of Covid-19 patients wearing oxygen masks.

“These images could be called 'distressing' for anyone who has lost a loved one due to a Covid-related illness.”

She laid down the following challenge, “If Sinn Fein think that images of babies killed by abortion are horrific, then the horrific act of actually killing a baby by abortion should also be too distressing to be allowed in the Newry Mourne and Down district.