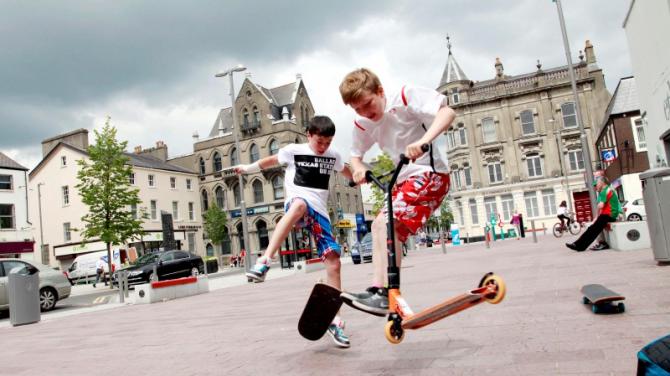 MEMBERS of the newly-formed Mourne Urban Sports (MUS) group have announced a three-towns development plan for south Down.

If everything goes as planned, Newcastle is to have a skatepark plus a modular pump track, while Kilkeel and Annalong also will have skating facilities.

But whether or not the facilities envisaged actually materialise is going to depend on the public's support and generosity. In the hope of kick-starting that, the group has set up a Gofundme to the amount of £255,000. It has also created a Twitter social media account, plus a website via which to document the three projects' progress.

Chris Parker, the founder of MUS, said, “We shouldn’t have to do this; it's an absolute disgrace hat there is practically nothing for young people to do here.”

Outlining the history of facilities – or lack of them - in the towns affected he said, “The Council removed the skatepark in Kilkeel in 1995 and, 26 years later, have yet to replace it.

“Newcastle’s indoor skatepark, which was the first in Northern Ireland, was replaced with something that does nothing for the people it was taken away from. It’s now 2021 and skateboarding is an Olympic sport.

“Yet our streets are full of kids on bikes, scooters and skateboards, and there's nothing in this area for them - nothing!”

Voicing his evident exasperation he continued, “What really makes this worse is that Northern Ireland leads the way in drug and alcohol abuse, mental health issues and suicide. We are the worst-affected [region] in the UK and it’s our young people who are disproportionately bearing the brunt of it.

“These young people - our sons and daughters, brothers and sisters - are the exact demographic that, typically, you find at urban sports venues riding skateboards, scooters, in-line skates.

“So given that we don't have such facilities, is it any surprise they are suffering?” was Mr Parker's rehetorical question. “We’ve taken from them and not given them anything in return; they have no positive outlet, no free space where they can hang out, de-stress, burn off a bit of energy and then get back to facing the world.”

Highlighting the role and importance of urban sports facilities such as those proposed for Newcastle, Kilkeel and Annalong, he continued, “Specifically tailored venues like skateparks, are amongst the most welcoming and encouraging you can find. That's where people of all skill levels earn praise for their skills and achievements which come as a result of a lot of dedication and practice.

“It takes hard work to get results! Isn't that something we want our young people to learn and know?

“Our kids are missing out on a lot of things these days and I don’t see that changing unless somebody does something about it.”

Then appealing directly to Democrat readers he said, “But that someone isn’t me; it's you – the person reading this article. You need to help me by getting in touch or making a donation.

“Then, between us, we’ll make something happen. You never know - we could be looking at a British or Irish Skateboarding gold medal winner in the next eight years,” he suggested. “What we definitely will be seeing, though, is a lot of happier, healthier young people.”

If you can help, the MUS group would be delighted to hear from you. It can be contacted at Mourne Mountains, Newry BT34 5XL, Northern Ireland, phone +44 (0) 7715881086.or via mourneurbansports@outlook.com