Margaret Square electric clock erected in 1938 and sold in 1966 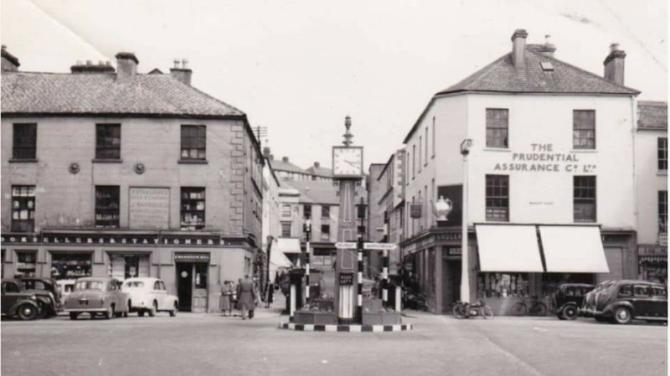 NEWRY’S former Margaret Square clock is a popular subject in our Facebook group 'Newry's Historic Facts Folktales & Photos' as we and the wider public often wonder about its final fate and desintination.

Surprisingly the clock was not as old as some of us may have imagined and was not in usage that long with our Newry Urban Council back in February 1938 acting on a report from a Surveyor.

They went on to enlarge and make permanent the temporary roundabout in Margaret Square and to erect a 4-dialled (faced) all-electric clock there.

It came as a surprise to me that the clock was only in usage and on public display for just 28 years and it was powered by electricity and from looking at old photos and listening to oral history I had the clock being much older.

Apparently the clock was becoming a traffic hazard and the pedestrian crossing north of it was becoming an obstruction so both of them had to go.

During my research in 2018 I happened upon the year 1966 and came across a interesting piece about the clock being up for sale with four offers being made to the council, which was rather sad, in my opinion the clock should have been preserved, repaired and kept by the council for future generations to appreciate as part of old Newry.

The council of the day instead did in effect sell off the families civic jewel, the Margaret Square Clock.

An offer to pay the council's fixed price and a guarantee that the clock would not be resold, remaining council property and available to be claimed at any time. (This seemed a reasonable civic minded offer to me.)

A Cllr Sloan was of the opinion that it should be re-advertised - "You're giving it away." he said.

The councils clerk a Mr. McMahon moved that it be sold to the highest bidder, Cllr William Baird seconding the clerk pointing out that the fourth offer was invalid in that no specific price had been made.

(No council fixed price, surely they could of postponed the sale and set one?)

The matter went to a vote and Mr. N. Heatherington, Rostrevor, was declared the successful tender.

Then without due concern about future generations or historical preservation with the stroke of a pen Cllr William Baird and the council clerk McMahon sounded the death knell of the people's clock.

A few years ago I visited the Newry Museum to view the only remaining face of the once four faced clock. I was disappointed with the clock face expecting something a little more grander.

Perhaps the beauty of the clock lay in it's nostalgia and it's once towering frame. I have often wondered is this clock laying somewhere or in a shed or back garden rusting away?

It seems no one knows of its final destiny and fate and it would be such a discovery if it was found and repaired to it's former glory...the search would have to start in Rostrevor.