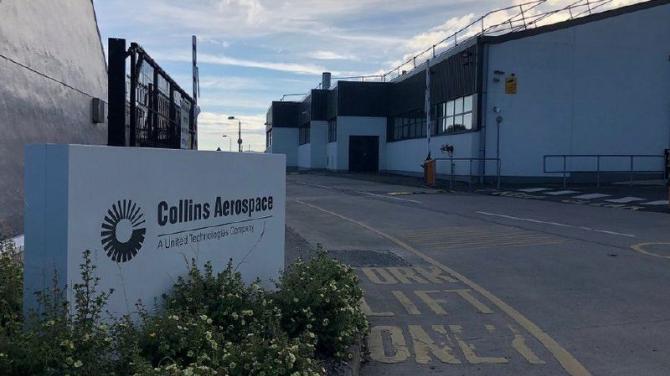 KILKEEL based Collins Aerospace announced on Friday it is cutting 62 jobs due to the impact of Covid-19 on aerospace production.

The company has an aircraft seat manufacturing plant in Kilkeel employs about 1,000 people in NI.

In a statement, the company said the redundancies were due to "a slower than expected recovery from the pandemic".

A spokesperson for Collins Aerospace said that the plant "is currently facing a slower than expected recovery from the pandemic".

"As a result, Collins is conducting voluntary and involuntary separation plans for approximately 62 employees in our Kilkeel site.

"These actions are not taken lightly and are critical as we remain committed to ensure the long-term success of our business and the viability of our Kilkeel site."

“Further to an urgent meeting with the management team at Collins Aerospace, the SDLP delegation learned that up to sixty two people will face redundancy as the thirty day collective consultation process comes to a close at the end of June. It is anticipated jobs will be lost from across most areas within the business.

Ms Bradley said, “Sadly this further reduction in employee numbers does not come as huge shock as the continuing pressures on the aviation industry during Covid-19 are well understood. Whilst the job furlough scheme carried Collins Aerospace through the past months, the reality of a reduction of work on the order book in year is challenging.”

In planning for the longer term survival and sustainability of the factory in Kilkeel, the management team explained how they had reached a point where further redundancies were simply unavoidable. Ms Bradley said, “This is devastating, particularly for those who will be directly impacted by job loss.

It was abundantly clear in the meeting that the decision to make redundancies did not come easily as the management described the impact of losing valued and experienced employees.

The South Down MLA added: “During our meeting we sought assurances that all employees will be supported during this anxious time as people await news on their job security. Redundancy is never easy to face but it is particularly challenging at this time when our local, national and global economies are under so much pressure from the pandemic.”

The MLA continued, “Whilst Collins Aerospace brace themselves to weather this difficult period, the government must do all it can to assist directly in overseeing a timely recovery of the industry. Only then can we begin to embrace the possibility of growth and recruitment.”

Kilkeel based SDLP activist Amanda Quinn added, “ Collins Aerospace is such a significant employer in the area and many households are reliant on its continued success. News that another sixty two local people face unemployment in the weeks ahead is deeply worrying. Our local economy in Kilkeel hinges heavily on the well- being of the aircraft factory, this fact needs to be clearly understood at every level of Government to ensure a timely plan to recovery is urgently put in place”.