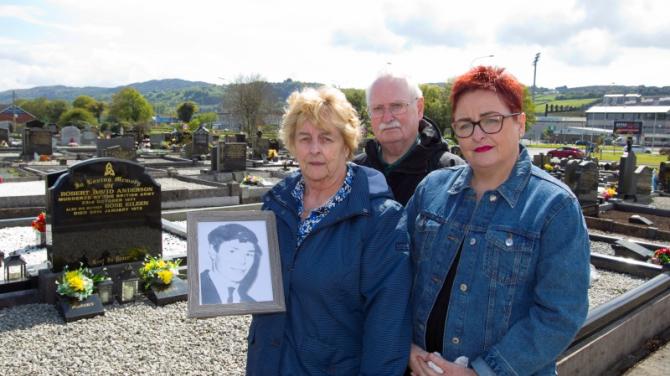 VINDICATION for a Newry man who was killed by his own former comrades in arms is the roots of a justice campaign 50 years after he was brutally gunned down by the British army.

Robert Anderson (25), a former Royal Signals soldier, was one of three Catholic men killed during the same incident on Hill Street on 23 October 1971.

British soldiers of the Light Infantry, who claimed to be waiting on an IRA bomb team, fired shots from the roof of the former Woolworth's store on what they say was an attempted robbery.

Also gunned down on the same night at the foot of the Cathedral were teenager Sean Ruddy (19) and Thomas James McLaughlin (27), who was a father-of-two.

A 2011 Historical Enquiries Team report found that the killings were unjustified.

The British soldiers involved in the shooting were contacted by the HET. but they declined to make a statement.

Five decades after her brother lay dying on the streets of Newry, Robert's sister, Bernadyne Casey remembers Robert fondly a a young man who had his whole life in front him.

“Robert was a good son to his mother, he was a typical brother, we got on well, most of the time.” said Bernadyne.

“He was a twin, his twin brother John ('Big Red') broke his heart when Robert was murdered, John also served in the Irish Guards, our father was a Coldstream Guard.

“Robert was in the Royal Signals, when he left the army he came home to Ireland to meet a girl and settle down but this wasn’t to be,” she added.

Now over 50 years ago since the British army shootings on an October night in Newry's Hill Street, Robert's sister told the Democrat of tragically hearing the actual fatal shots being fired that ended her dearly loved brother's life in a matter of seconds.

“My husband and I had been out for a drink and on our way home we had heard the shots, but continued on home not thinking what was to come,” recalled Bernadyne.

“A neighbour knocked our door about an hour later, just after midnight and told us that Robert had been murdered.

“I was in shock, but was worried about my mum.

“I told her what the neighbour had said and she didn’t utter a word for a full 24 hours, she only broke down when my youngest brother Ralph who was in the Irish Army, came home the next day. “It was a very difficult time for us.

“My other brothers who had all served in different branches of the English Military were afraid because of what had happened to Robert.

“We didn’t get to see Robert after he died, his coffin had to remain closed, this was very hard on my mum and 13 weeks to the day that Robert had been murdered, my mother Eileen also died, she died of a broken heart,” she added.

The early 1970s paid witness to a numerous killings in Northern Ireland with the recent inquest findings of the Ballymurphy Massacre ringing out the innocence of 10 murdered civilians in Belfast.

The innocence of Robert Anderson has never been doubted by his family.

Robert's niece, Michelle Osborne is supporting her mother in the fight for justice that aim to bring military chiefs into the public realm to admit responsibility for his death.

So far there has been no process put in place to deal with legacy cases,” said Ms Osborne

Like all legacy families we’ve waited for a process to be established to finally learn the full facts of what happened here.

“In our case there has never been a proper process and the soldiers have never faced a proper independent investigation. Instead they operated with impunity while we were left to deal with the loss.

“Ballymurphy has shown what a proper Art 2 compliant inquest can do.

“It had the power to compel these former soldiers to give evidence.

“It had the power to make findings on the evidence.

“We welcome the outcome for the families and especially now that their family loved ones have been vindicated.

“I think for all victims seeing other families getting justice is always a welcome step.

“We would hope to get to that stage in our case.

“We want a proper investigation into what happened to Robert.

“As a family we would hope that the historical record would show that Robert was murdered by the British army.

“That his murder and the murder of the two other men were without justification, they were murdered. This was a shoot to kill operation.

“We want a proper independent investigation into these events whether by an outside police force or via an inquest process.

Legal representative of the Anderson family, Gavin Booth of Phoenix Law told the Democrat that an appeal was being launched for witnesses to come forward to reveal the truth of the Hill Street multiple killings by the British army.

“These men were walking up Hill Street and were innocent.

“The Military while perched on top on the old Woolworths building had no justification to kill these men.

“The family are appealing for anyone with information around that night to come forward to us their solicitors, to the family or to local politicians,” added the solicitor.