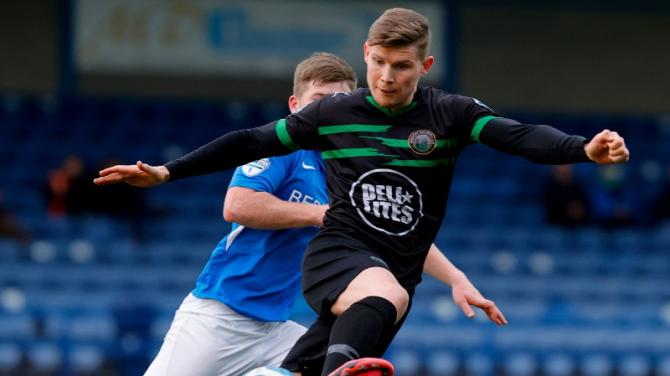 THE finishing line is in sight for Warrenpoint Town.

After eight months of unceasing graft and sacrifice of a sort never before demanded of part-time footballers, completion of a gruelling schedule finally is down to the last few fixtures, writes Niall Cozier.

Trounced 4-0 by Glenavon at Mourneview Park as recently as Friday night past, the pair will meet again tomorrow night (Wednesday, May 19) in the semi-final of the Mid Ulster Senior Cup.

With Mourneview Park hosting the Sadler's Peaky Blinder Irish Cup final this Friday, what was to have been a home tie for the Lurgan Blues has been switched to Dollingstown. That at least denies the Gary Hamilton-tutored side the home advantage they would otherwise have had. Warrenpoint certainly aren't complaining about that.

The winners of tomorrow night's Mid Ulster Cup semi will meet Loughgall at Mourneview Park this Saturday afternoon, the villagers having already booked their place by virtue of their 4-1 victory over fellow-Championship side and near-neighbours, Annagh United from Portadown, at the weekend.

Of course, it was Loughgall who ended Warrenpoint's interest in this season's Irish Cup by beating them 1-0 in their second round clash at Lakeview Park on May 8. So were they to beat Glenavon tomorrow night, Barry Gray's men would relish the prospect of being able to avenge the embarrassment to which they were subjected by those particular Championship opponents.

Whether or not the Town get the opportunity to do that remains to be seen and let's not pull any punches – they go into tomorrow night's date with Glenavon as massive underdogs.

Inclusion in the last four is the 'Point's reward for last week's penalty shoot-out victory over Premier Intermediate League Dollingstown in the quarter-final at Milltown.

Whatever the outcome of their Mid Ulster Cup bid, the focus will then switch to the locals' Premiership campaign which ends on Saturday, May 29 when they host Carrick Rangers in their final outing of 2020/21.

Prior to that their penultimate Danske Bank Premiership fixture is next Tuesday night (May 25) when they go to Ballymena United.

Trips to the Ballymena Showgrounds are never easy and how the David Jeffrey-managed Sky Blues fare in the Irish Cup undoubtedly will play a significant part in the Co Antrim side's attitude going into next week's date with Warrenpoint.

Tonight (Tuesday, May 18) at Mourneview Park United go head-to-head with Linfield in the semi-final of the Sadler's Peaky Blinder-sponsored competition. Were they to win that tie, they would then face the winners of the Crusaders v Larne semi in Friday night's final which also will be played at the same Lurgan venue.

Having lost the 2020 Irish Cup final against Glentoran who beat them 2-1 after extra time, Jeffrey-coached Ballymena clearly are hoping to go one better this time. The odds, however, are against them. Each of the other three semi-finalists made the top six cut in the league race, while Ballymena ended in the lower half of the table alongside Glenavon, Portadown, Warrenpoint, Carrick Rangers and Dungannon Swifts.

How Ballymena fare in their Irish Cup bid clearly will influence their mood going into Tuesday night's league meeting with Warrenpoint.

Win it and they would be buzzing – but possibly too much so for their own good. Would they be able to come down from such a high?

Fail to win it for the second year in a row and their mood could go one of two ways; totally despondent and lethargic as a result, or wholly determined to make their next opponents pay the price for that disappointment.

Whatever happens between now and the full-time whistle on May 29, Warrenpoint will finish in a better position than was the case last time round when their survival in the top flight was first cousin to a miracle. Worst case scenario, they will finish 10th of the 12 runners. At best, they will be 9th. Either outcome will be an improvement on what went before.

And there is that chance, albit an outside one, of silverware in the form of the Mid Ulster Senior Cup, though to lift that they would be required to beat Glenavon and then Loughgall, both of whom have lowered the Town's colours in recent days.

Saturday, May 22: Should Warrenpoint win the above match, they would then meet Loughgall in the Mid Ulster Senior Cup final at Mourneview Park).