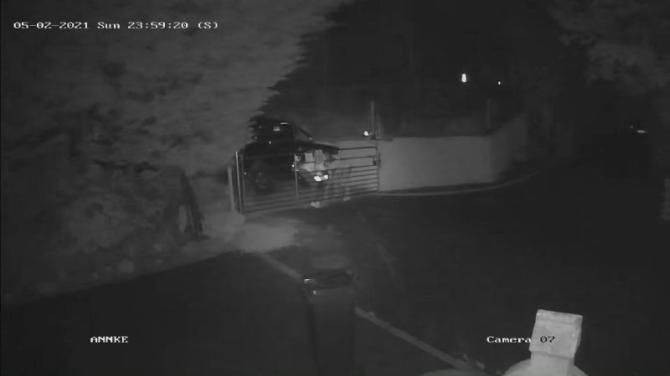 A MAYOBRIDGE family is living in fear after an elderly woman was targeted in an outrageous tow-tuck criminal damage act to her home under the cover of darkness.

The local family told the Newry Democrat this week that they have been the victims of an onslaught of abuse, threats, and criminal damage since erecting a gate at their homes.

The pensioner victim, who wished to remain anonymous, has made a plea for witnesses to come forward to end the agony of intimidation that she claims to be under day and night.

“I’ve lived in Mayobridge for over 50 years, and my family and I are now living in constant fear in our homes on Chapel Hill,” said the woman.

“The gate was a last resort, there has been criminal damage to our cars, people walking around our properties late at night and also treating it like a thoroughfare at all times of day and night.

“We had originally put-up signs asking people to stop walking through.

“These were ignored so family members asked people to refrain, but they were met with hostility and people continued to ignore the signs and request.

“In fact, more people started to walk through and congregate on parts of our property in the evening time.

“We can’t imagine what the purpose of this action was for.

“My family and I have been subjected to ongoing verbal abuse and intimidation on our doorstep.

“The day after the gate was erected (26th April) three local business men came up to my home and verbally abused my family and I, including issuing sinister threats ‘that the gate wouldn’t be there that long’.

“We have also received numerous nuisance phone calls and have been made aware of a petition being circulated about a gate on Bendy’s Lane.

“To clarify, we have never erected a gate on Bendy’s Lane, the gate is situated on ground at Chapel Hill.

“Sadly, things took a sinister twist on Monday (3rd May), when three men in a dark 4x4 attached straps to the gate and forcefully removed it, leaving it mangled and abandoned at the top of the entrance to my home.

“We haven’t slept, fearful that if they would carry out criminal damage what else are these people capable of doing,” exclaimed the elderly woman.

The PSNI in Newry has appealed for witnesses following the report of a criminal damage attack on the Mayobidge property.

“It was reported (May 3) that a black pick-up truck had reversed down a laneway before stopping at a gate,” said a spokesperson.

“A rope was attached to the gate and to the tow bar of the pick-up which was then used to pull the gate from its hinges leaving it badly damaged.

“The rope was left at the scene and the pick-up then left the area.

“Enquiries are ongoing into this incident and officers would ask anyone with any information to contact them at Ardmore station on 101 quoting reference number '8' 03/05/21.

“A report can also be submitted online using the non-emergency reporting form via psni.police.uk/makeareport/.

“You can also contact Crimestoppers anonymously on 0800 555 111 or online at crimestoppers-uk.org,” added the spokesperson.