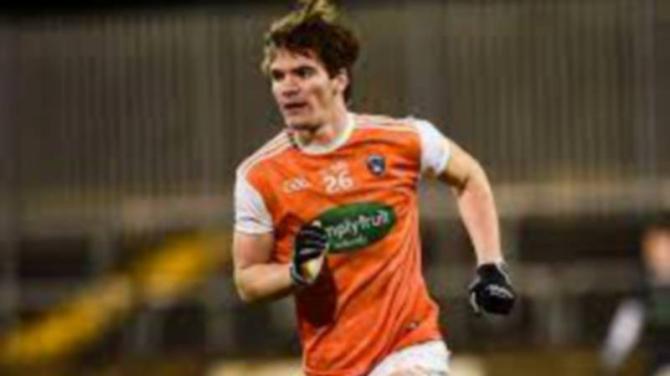 Armagh rued a missed penalty as they lost to rivals Tyrone in an entertaining contest tonight.

The result means Armagh need a result against Donegal to avoid a relegation play-off.

Before throw in, news had filtered through that Donegal and Monaghan had drawn in the other group game which meant an Armagh victory would secure divisional status.

Played in Armagh’s Athletic Grounds it was Tyrone that marched into an early lead with Peter Harte striking a rasping goal on ten minutes to give the Red Hands a 1-03 to 0-01 lead.

Tyrone’s tackling was immense and Armagh coffed up possession too easily in the early stages.

However, the Orchard men grew back into the game with Rory Grugan on target and Jarly Og Burns hit back with a goal on 15 minutes after exceptional play by Rian O’Neill.

As expected it was hard hitting and Armagh lost key players Aidan Forker and James Morgan and they used up five of their seven subs in the first half. Jemar Hall was taken off after scoring a point and Campbell and Oisin O’Neill found the target.

Tyrone’s Darren McCurry kicked four first half points with Darragh Canavan and Paul Donagh also on target. The sides were level on two occasions at even after seven additional first half minutes they couldn’t be separated.

The second half started in rip-roaring fashion with Tyrone finding the net but it being disallowed for square ball. It was end-to-end before Rian O’Neill gave Armagh the lead for the first time on 42 minutes but by the 45th minute the Red Hands were back in front and a man up. Grugan was sin-binned after picking up a black card and Donaghy kicked two frees.

Rian O’Neill laid off wonderfully weighted pass to Conor Turbitt who had only the keeper to beat and he gave Armagh the lead. Mattie Donnelly replied with a stunning point before Niall Morgan saved from Stefan Campbell’s penalty. McCurry added his fifth point to level the sides for a fourth occasion and then kicked his sixth to give Tyrone the lead with the last kick of the third quarter.

Rory Grugan came back onto the pitch after the second water-break but Tyrone shot into a four-point with Mark Bradley’s goal. It was a kick to Armagh’s stomach but they had 15 minutes to turn things around.

Jason Duffy pointed to close the gap but McCurry replied with another converted free as Tyrone led 2-13 to 2-09 with an hour played. Grugan’s free left a goal between the teams but Armagh went looking for the goal and were shut out by solid Tyrone defending and then Bradley and Meyler tagged on points to wrap up victory.