Toilet troubles with £1.2m budget flushed away ahead of pay for pee 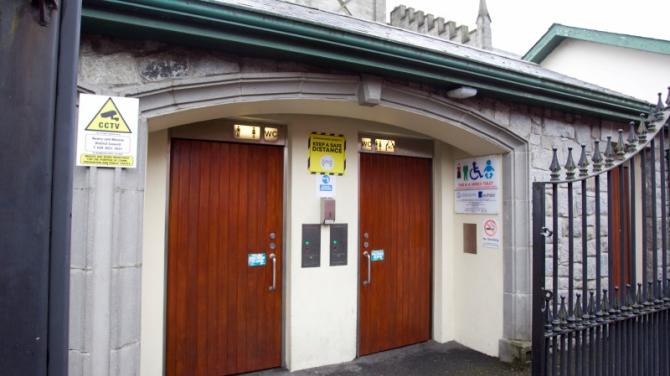 OVER £1.2m of a council budget has been flushed away as time lapsed to upgrade more than 30 public toilets in Newry, Mourne and Down District Council (NMDDC).

New money is yet ring fenced for the significant programme which aims to support a tourism economy of £50m and a projected 5,000 jobs.

However, despite a report from the British Toilet Association stating that communities of 1,000 population requiring a toilet, Newry with more than 26k will still have to rely on one single public service at Newry Market to facilitate its bowel behaviours with Newcastle ably regulating .

The council scrutiny of the porcelain problem is also set for the public to be paying more than the customer penny with the highest value for a toiletry evacuation priced at a £1.

The Democrat contacted the NMDDC this week to investigate its WC proposals for the public.

“Newry, Mourne and Down District Council’s Public Toilet Strategy was approved at the May 2021 Neighbourhood Services Committee, this will go forward to full council meeting in June 2021 for ratification,” explained the spokesperson

“It is considered that taking forward these recommendations will require the roll-out of a number of work packages each involving a range of work activities and approval procedures within the council and also externally.

“This will inevitably take time to deliver, but it is expected, if approved to proceed, that significant progress can be made in all these identified areas during the course of the current council, 2019 to 2023.

“There is not an expectation that the fulfilment of the Strategy objectives will be complete by 2023.

“There is currently no set budget for the roll out of projects arising from the Public Toilet Strategy.

“There will be both revenue and capital funding commitments to be determined and agreed by the council as the strategy is implemented.

“Where funding for such projects is to be agreed then the setting of this will be through council’s governance procedures.

“The initial budget of £1.2 million was based on estimated costs for refurbishment and replacement of existing public toilets and a commitment to provide a new public toilet in Killough.

“Through the development of the Public Toilet Strategy it was assessed that the actual budget requirement would only become clear as projects were agreed by council.

“The initial £1.2 million previously contained in the capital programme was removed, pending the completion and approval of the business cases by council.

“Once the Public Toilet Strategy and associated business cases are approved, it is anticipated that a capital budget will be allocated,” added the spokesperson.

The millions of pounds that are expected to be generated from shoppers and visitors to the area will not generate new facilities in Newry with shopping centres being used a support system for toilet use.

Where once Newry had numerous public facilities the city has seen the closer of Marcus Square toilets and in the last number of days the destruction of the former Railway Avenue toilets as a new multi-million pound development begins.

Toilets in Newry have been known to have acquired anti social elements in the past with drug use on major problem.

It is hoped that charging for a flush will actively prevent any new similar problems occurring.

Across the district the council will be £59k out of pocket for maintenance of the 31 public toilets under its control.

Nevertheless with the new pay for pee policy it seems that the local authority will soon recuperate its costs, though there are no plans to bring new toilets to the city, but a view to lobby existing conveniences to be more convenient.

“A number of work packages will now begin to be developed following on from approval of the Public Toilet Strategy,” said a council spokesperson.

“Through this process it is possible that the overall public toilet provision can be increased across the district, including Newry.

“Of the 31 public toilets within the council’s current public toilet provision there is one unit in Newry located at Newry Market.

Currently, it is open seven days per week from 9am to 5pm.

Despite no new toilet for Newry, the review of public facilities has reported only two toilets as 'A' grade being in Annalong and Killyleagh.

The vast majority are seen as grade 'B' of sound operational status with only minor deterioration, three toilets in Crossgar, Crossmaglen and Rostrevor have been listed as in need of major repair or replacement.

Newry Market toilets have been ear marked for an upgrade for which the guidelines of use are one toilet per 550 women and girls and one cubicle or urinal per 1,100 men or boys, dwelling in the area.

The council is now looking into security and advertising of its single Newry city toilet and the 30 others in the district, which it hopes to ensure the needs of people with physical disabilities as well as autism, dementia and other health conditions such as ostomy sufferers and bowel conditions considered as part of future works to improve toilets.

The moves by the council have been welcomed by Bowel Cancer UK, operations manager for Northern Ireland, Sarah Christie though her hopes for an increase in facilities seem to be dashed in the latest council proposals.

“We are pleased that Newry, Mourne and Down District Council held a public consultation on Public Toilet Strategy at the beginning of 2021,” said Ms Christie.

“We hope the outcome will generate extra provision for Newry, which include accessible toilet facilities, especially for people who have had treatment for bowel cancer who may need urgent access,” she added.

With the cashless society gaining more popular and even required for health reasons in the Covid pandemic it seems if plans steam ahead that we will all soon have to swipe to wipe at a council toilet in the near future and tie a nought in it if there is a queue at Newry Market.