James and Fiadh most popular new born names in Newry, Mourne and Down 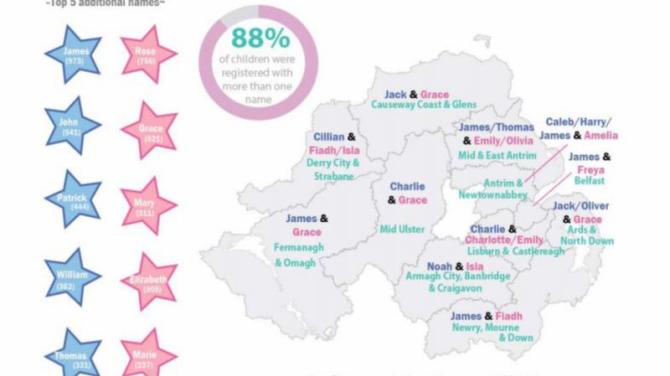 JAMES and Fiadh are the two most popular names for new borns in Newry, Mourne and Down.

IN earlier generations, far fewer names were used than is the case today.

And in view of the diversity of religions and cultural backgrounds in modern-day Northern Ireland, in tandem with the growth of atheistic secularism, the term 'Christian name' has been jettisoned. Nowadays 'first name' is the parlance.

In the latest statistics for names given to new-born children, alternative spellings are treated as separate names - Amelia and Amelija are examples of this.

On the other hand, names in which there are accents are viewed as being one and the same - Séan and Sean for example.

Those most likely to refer to baby name statistics include new parents, soon-to-be parents and those who are simply curious about the popularity of their own name.

Additional users include researchers who examine how names are changing over time and journalists [like this one] who write articles on the grwing or declining popularity of names.

The popularity of baby names can be influenced by a variety of factors including the standing of current music scene or film celebrities, high-profile sportsmen and women, memorable places, religious figures, cultural and/or ethnic origins and, of course, names of relatives and friends.

The range of names being used by parents has grown considerably over the past 40 years, witnessed by the fact that whereas 1980 saw the registration of 1,224 and 650 for girls and boys respectively, this had grown to 2,158 and .179 in 2020. Of these, some 485 and 381 respectively were new ones, meaning they had not been registered since the reporting of baby names began in 1997.

Some 56% of these new names were for girls and 44 per cent were for boys.

•For the sixth successive year, James is the number one, with 190 baby boys having being given this name.

James has been ranked in the top five each year since reporting of baby names began in 1997.

• Daniel fell from the top 10 most popular boys’ names for the first time since 1998.

With Jack being a derivative of John, that means the top four are Biblical names.

• Finn and Theo entered the top 10 in 2020 for the first time, after gaining steady popularity each year since 1997 and 2012 respectively.

• Grace – again note the Biblical influence - was the most popular name for girls. A total of 176 girls given this name in 2020.

• Fiadh entered the top 10 in 2020 for the first time since reporting of baby names began in 1997. Its breakthrough camew as no surprise; it had been gaining steadily in popularity each year since 2008.

• Emily remained the second most popular girls’ name in 2020, holding this spot in the top 10 for the last three consecutive years.

• Anna fell from the top 10 most popular girls' names for the first time since 2012, while Evie also lost a top 10 position in 2020 after gaining it the previous year.

• These replaced names such as Gabriel – one which had only joined the top 100 for the first time in 2019.

• Of the nine new entries, Arabella, Ayda, Bonnie, Hallie, and Nancy made the top 100 for the first time since the recording of baby names began in 1997.