Rally to support people of Palestine 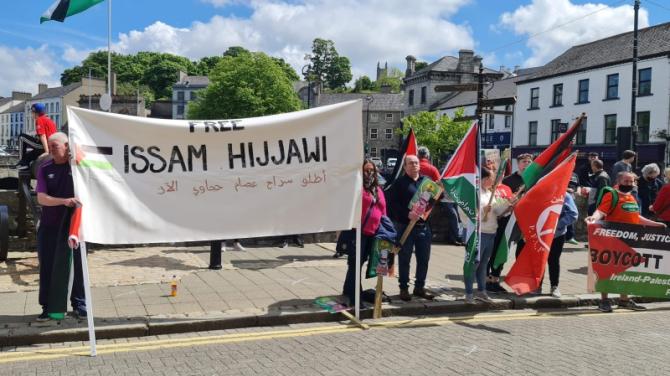 SUPPORT for the people of Palestine was on show at a well turned out rally Newry Town Hall rally on Saturday.

The Ireland Palestine Solidarity Campaign (IPSC) was supported by republican group Saoradh in solidarity with those who have been killed in the recent upscaling of Israeli and Palestine conflict.

The response from local people comes days after Ireland became the first EU country to declare the building of Israeli settlements in Palestinian territories as de facto annexation.

A Dáil motion, tabled by Sinn Fein, was passed after it received cross-party support.

Secretary of Saoradh's Newry, Eadaoin Ui Eidhin spoke directly after the rally and praised the ISPC for highlighting the concerns of the community for the people of Palestine.

“Our theme was solidarity with Palestine while also highlighting the internment of Palestinian political prisoner Dr Issam Hijjawi, who is currently being held captive in Maghaberry jail.

“Activists displayed solidarity banners and unfurled Palestinian and PFLP flags in the well attended rally that was organised in response to the recent bloodshed in Palestine,” he added.

The campaign to further the its political stance against Israel's military activities has witnessed Saoradh promote a boycott on its imported good.

“Over the past number of weeks Saoradh in Newry have been more active on the issue by organising large protests at Sainsbury's, Marks and Spencer and by labelling Israeli goods with boycott stickers,” said the group secretary.