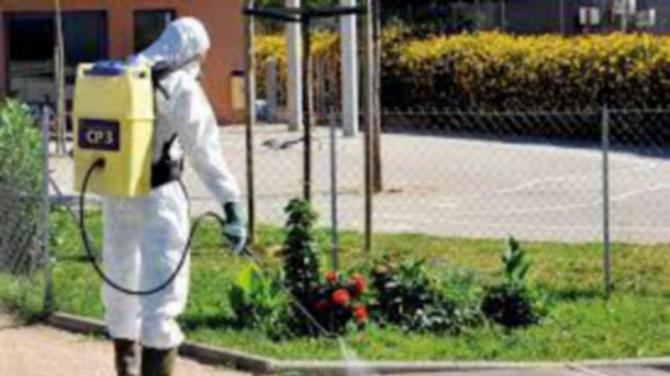 RESIDENTS of the NI Housing Executive who support a £338m rental system are being kept in the dark over the use of a “probable” cause of cancer spray around their green “living areas”.

The Democrat’s gylphosate campaign has now already seen some success with part removal in the community by a contracted gardening company, but with seasonal spraying already begun much of the district has already been dosed in the chemical.

Not willing to let the public be informed, with almost 85,000 houses in its control at near maximum capacity the NIHE has refused to name the weed killer chemical it uses to the Newry Democrat and stated “when we treat our areas for weeds, there is no requirement to alert tenants to this activity”.

However, the NIHE has confirmed an eco-friendly strategy when it comes to woodlands and a potential shift to other types of weed control in the future, but presently no disclosure on areas populated by tenants and their children.

“Our grounds maintenance staff have a duty to maintain our places and spaces, keeping them safe and attractive areas to live,” said a NIHE spokesperson.

“There are 1,223 managed grassed areas in the Newry, Mourne and Down Council area and 42 of these sites are in the Newry district.

“We use weed treatment products sparingly, when there is no other option available and primarily to treat hard surfaces and amenity planted areas.

“A ‘No Spray’ policy is in place for our woodlands and we prefer to use soap based, eco-friendly substances on hard surfaces, while often using mechanical brushes to remove weeds from these surfaces,” said a spokesperson.

Two authorities in Northern Ireland who are cheek by jowl when it comes to maintaining green areas are the NI Housing Executive and the Department for Infrastructure.

Often grass verges are only half cut at a time across the North with each responsible for literally their own patch.

When it comes to weed killer use the DfI has admitted to using 'Samurai' a well known glyphosate containing chemical.

However, the NIHE has stone walled on revealing its preferred weed killing spray with the potential to involve tens of thousands of its residents.

The glyphosate chemical product is currently used by Newry, Mourne and Down District Council (NMDDC), the Department for Infrastructure and contracted gardeners of housing management companies.

The cancer evidence, which the World Heath Organisation (WHO) has addressed as a “probable” link has been presented to councils by environment and health campaigners with action towards an all out ban being sought.

In the public interest and your right to know, the Democrat highlights the spraying of the chemical by the authorities on the ground beneath our feet without anyone being told or given a choice to protect themselves and the environment.

The NIHE has shown some environmental concerns for mother nature with alternative weed killer on its lands, but what they spray on areas close to homes is anyone's guess.

“We already use bark mulch in amenity areas to suppress weeds and we will, in future, recycle tree chips from our estates to mulch existing planting areas,” said a spokesperson.

“At most, twice annually, we use weed treatment fluid to spray a 100mm wide strip along the edge of paths and around obstacles on our managed grass areas.

“We use commercially approved and available products under very strict conditions, we also ensure careful storage too.

“When deployed correctly, there are no risks to the public or the wider environment.

“The products we use are regulated by the Health and Safety Executive (HSE), with extremely high environmental and safety standards being demanded before any product is approved for sale,” added the spokesperson.

When the Democrat asked to clarify the name of weed killer chemical used and what percentage of the weed control it is used for compared to echo-friendly weed control products, the NIHE responded: “We have nothing else to add to our statement in relation to your query on glyphosate spray.”

Meanwhile, residents of a Newry housing area received positive news from the area's management company who confirmed that its sub-contracted gardeners, who also complained to the Democrat of “head aches and sore eyes” after using glyphosate, had now switched to a non-glyphosate weed killer, showing that pressure by local people can make a difference.

There is now also more hope that the DfI will stop spraying the chemical around local homes if residents can make their voices heard.

The DfI confirmed to the Democrat this week that it would possibly look into addressing its mapped area of approximately 1,032km of kerb lines, 190km of centreline and 28,000 square metres of footway annually.

However, the Democrat has witnessed quad-bike mounted glyphosate weed sprayers confirmed to be from the DfI spaying along the kerbs edges of Newry homes, with children playing close by.

So, the Democrat asked if residents could object to the use of such chemicals by DfI to their homes to which the department opened the door to an opt out review, but stated it would not carry out any investigation to the chemical, putting the responsibility on the Chemicals Regulation Division authority of Great Britain.

“Weed spraying using this fully approved spray is only carried out in areas maintained by the Department.

“This is in order to protect the carriageway and footway surfaces.

“As far as is practicable, care is taken to ensure that areas adjacent to these maintained areas are not affected.

“Certain areas could possibly be removed from the schedules, however spraying is the most effective and efficient treatment.

“If areas were not sprayed it is unlikely that the Department could undertake alternative weed removal treatment.

“As the chemical conforms to UK health and safety standards as set by the Chemicals Regulation Division of the Health and Safety Executive (Great Britain) the Department does not plan to investigate its use,” added the spokesperson.

Mass spraying of glyphosate is now due to continue its 2021 programme in June and July with follow up in August and September.

The Democrat will continue to report on the campaign to end glyphosate use.

If you have concerns raise them to the Newry Democrat online Twitter, facebook, email (donal.mcmahon@newrydemocrat.com) or by letter to the office.