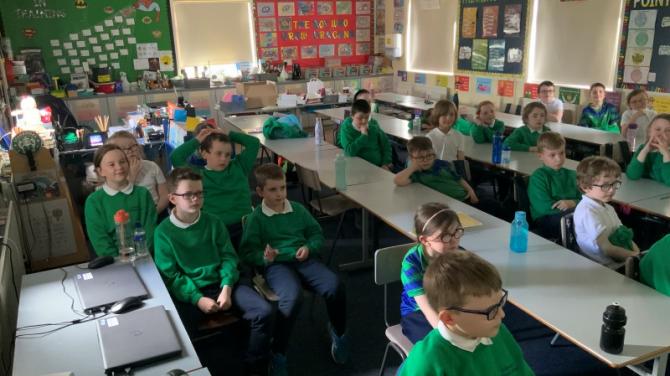 Thousands of schoolchildren are being encouraged to tell their own stories thanks to a new, colourful booklet that has been distributed free to schools across Northern Ireland.

Staff from Education Charity Into Film have invented Story Builder, an exciting and interactive teaching resource that uses the building blocks of filmmaking to stimulate young minds.

Into Film had originally distributed 2,000 Story Builder packs to 60 primary schools but it has proved so popular they printed another 2,000 to cope with demand.

As well as providing colourful workbooks that make it easy for children to create characters and stories, Into Film also offers free virtual workshops to participating schools, using Q&A sessions to encourage collaboration and teamwork. So far, 800 children have taken part in the free online workshops.

Story Builder packs are also now available in the Irish Language because of unprecedented demand from Irish medium schools.

Sean Kelly of Into Film said: “We have had an amazing reaction to Story Builder. Teachers love that it engages with the curriculum in a way that it makes it fun for the children, while the young people are using their natural, innate creativity and curiosity to learn new skills and tell their own unique stories.”

The initiative is backed by Northern Ireland Screen which encourages schools to use film and moving image in the classroom to deliver a broad and balanced curriculum.

David McConnell, Education and Careers Manager of Northern Ireland Screen said: “We are delighted to support Story Builder, it is a great example of high quality moving image resources that enable teachers to embed film across a range of subjects and curriculum areas. Bringing subjects alive, encouraging young people to use their imagination and building their confidence in storytelling is no mean feat.”

Among those who have benefited from the new resource are 130 pupils from two County Down schools, who have been taking part in a Shared Education creative writing project.

Teachers at St Ronan’s PS in Newry and the Bridge Integrated PS in Banbridge said that Story Builder had encouraged pupils not usually interested in creative writing to become fully engaged with the project.

The two schools were among the first to use the colourful new resource which helps children aged 7-11 to develop their understanding of the basics of film – colour, character, camera, story, sound and setting – and create their own narratives.

Caolan Byrne from St Ronan’s PS said he would recommend Story Builder to teachers from other schools as a great way to stimulate interest in writing and storytelling.

“The children absolutely loved this resource, even those who usually shy away from literary projects. Every single child in the room was totally involved because of the quality of Story Builder – colourful, eye-catching and totally interactive. We will be using it as a medium for future projects and may even create a film or short animation.”

Claire Wilson from Bridge Integrated PS said that creative writing can be a very difficult area for teachers and Story Builder provided expert guidance on how to fire up young people’s imaginations.

“It has really helped the children with their language skills and showed them how to create characters and craft their own stories. It has empowered them to believe that they could be writers.”

Into Film’s Story Builder facilitator Naomh Cullen said that the two schools had approached them to help with their Shared Education project. The schools were working together on a book, The Boy Who Grew Dragons by acclaimed English children’s author Andy Shepherd.

She added: “I contacted Andy Shepherd to get her reaction to the children’s work and she sent them a video wishing them good luck. The children were very excited to hear personally from a published author, praising their efforts and encouraging them to develop new stories.”

Into Film, a UK-wide charity with a base in Northern Ireland, has developed a range of educational support materials that work with the curriculum and can be used in school or for home learning.