Domestic donkeys and ponies abandoned and left to die in Mournes 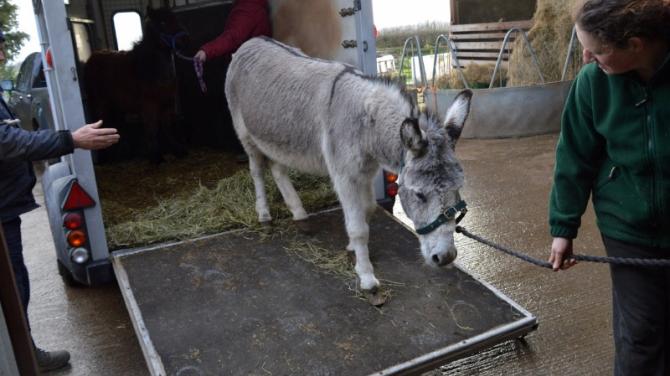 ANIMAL welfare organisations have this week highlighted to the Newry Democrat the desperate state of former domestic ponies and donkeys let loose by unscrupulous owners in to the wild of the Mourne mountains.

So far lifted 19 supposedly wild ponies and donkeys from near Newry and Ballymoney after being inundated with calls from landowners and the general public.

Crosskennan Lane Animal Sanctuary and Equine Halfway House have carefully investigated both the ownership and the condition of the equines.

They have been unable to establish ownership, but should an owner be found, they will be prosecuted for neglect.

Most of the equines rescued were from the Mourne mountains and there are at least another 20 in need at the moment.

Two animals have died of malnourishment and injuries in the past year.

The other two ponies were from Garry Forest, having been abandoned near there two years ago.

The animals taken in for care have had a range of issues including overgrown feet, heavy worm burdens, lice, rain rot, lameness, tendon damage, weight issues, and laminitis.

Laminitis is cripplingly painful damage to the soft tissues in the feet, and ponies are extremely susceptible to it, especially when eating rich spring grass.

The ponies may look fat and happy, but these attacks can be sudden and severe; even leading to death in the rescues’ experience.

Many of these issues will affect the ponies all of their lives.

Their tendon damage will never heal. Once a horse has had laminitis its diet needs to be carefully managed for the rest of its life.

The animals also have genetic defects that point to inbreeding, such as malformed teeth which causes problems eating.

Two young fillies have been rescued days away from death, one in January and one last weekend. Their teeth were so bad they could barely eat, and what they did swallow was ingested by the worms in their stomach.

They were also rubbing themselves raw from scratching at their lice.

Crosskennan Lane Animal Sanctuary's, Carol Workman has spoken on the desperate need of the animals left to wander aimlessly in the Mournes.

“These are domestic ponies who have been dumped or let loose, not wild horses,” said Ms Workman.

“They haven’t been bred to survive wild conditions, nor are they able to roam and mix with other herds, which has led to inbreeding. We understand that people enjoy seeing them on the mountains and think they are leading a happy, natural life. But for many of them it is a short and painful life.

“And surely no-one wants to stumble across the corpse of a horse when out enjoying the beautiful scenery?

“The ideal situation would be to have somewhere to bring them down from the Mournes when needed, like during the recent fires, and to give them necessary treatments. Unfortunately, no one can provide that place right now, so all we can do is monitor their health and bring them down for care when we see they are suffering,” she added.

The two rescues have not received any financial help.

They easily use up £50 worth of fuel a day, not counting what the volunteers pay for themselves. Bedding and hay costs are nearly £4,000 a month at Crosskennan Lane.

Then there are the vet, dentist and farrier fees and worming treatment costs.Many of the animals cannot be rehomed because of health issues, and the Sanctuary is full and regrettably having to turn people away.

The rescues, and a new volunteer-run group, Mourne Horse Watch, are continuing to track the herds and their welfare.

They are appealing for hikers to assist by recording the date, time and location of any sighting, and taking a photo and sending it to crosskennan@hotmail.co.
uk or Equinehalfwayhouse@
outlook.com.

However, the public is being urged not to post herd locations on social media to prevent people trying to track them down and possibly scare them off.

Fundraising activities are being set up, including a donation page at https://www.peoplesfundraising.com/
fundraising/mourne-mountain-pony-
rescue and both rescues can benefit from the upcoming One Voice for Animals auction running from 27 June - 3 July at www.facebook.com/groups/
onevoiceauction/.