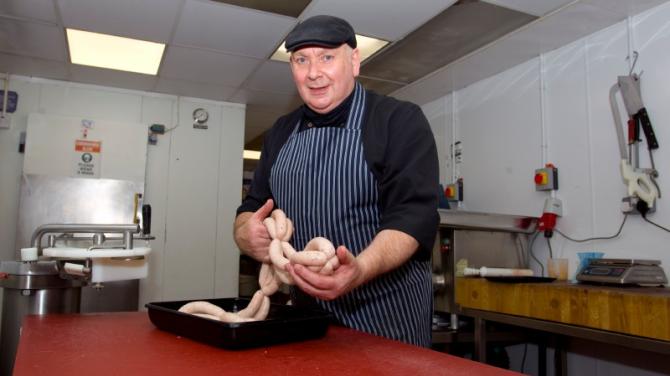 WITH the EU and UK going 'bangers' over the NI Protocol it seems that the traditional sausage sizzler could present a tug of war from Cumberland to Cookstown.

The Brexit grace period is set to end at the start of next month with some sausage fans ready to fill their freezers British bangers before they are barred from the North.

Environment Secretary George Eustice has now claimed the way the EU wants to implement the Protocal would make it impossible for UK producers to sell British sausages to Northern Ireland.

So, the Democrat caught up with our neighbouring butcher Seamus, from Taste of Gullion in Marcus Square, off Hill Street, and while he proudly makes his own sausages, he insists that Brexit, if not specifically the Protocol, has had an negative impact on his banger business.

“The price of stuff has started to gradually go up,” said Seamus.

“Where we would buy our stuff in, everything is going up on price and that probably boils back down to the farmer too,” he added.

With people being encouraged to buy local and support local business, it seems folly that there would be a huge demand for English meats, but the Newry butcher insists that his cost has gone up, despite buying his produce local.

“It still doesn't stop the prices from going up and that's what it boils down to for a lot of people,” Seamus said.

“Lamb and everything is away up in price.

“Even our local lambs we are paying maybe 30 or 40 percent more than the year before last.

“Then you read in the paper that the prices are going down in the marts, but then when you go to them the lamb still comes in at a big price.

“And all of it is being blamed on Brexit.”

Taste of Gullion has a proud tradition of making its own sausages, but Seamus admits that between Brexit and the pandemic his industry has faced a tough time.

“We produce our own sausages, we are not waiting on any meat coming from England, our pork is all local stuff and comes from Armagh,” Seamus said.

“You see people in the street, but there are days we are quieter than we ever were.

“With Covid we aren't getting as many of the older generation as we used to.

“And the older generation would have been buying different cuts, where the younger generation don't want it if it can't be placed on a pan or it's no good if it doesn't ping in a microwave,” he added.

The chairperson of the Federation of Small Businesses (FSB) in Northern Ireland, Tina McKenzie has called on both sides to end the public posturing and work on practical solutions in order to protect jobs and livelihoods.

"This gets boiled down to a single issue like whether British sausages can be sold in Northern Ireland, but there are around 30 issues the negotiators need to deal with, everything from VAT on second-hand cars to pot plants and moving pets around," said Ms McKenzie.

“We knew there would be issues to work through as a result of Brexit, but we are now more than six months on.

“The two sides need to stop talking to their own sides through newspaper articles and get on to the closed-door diplomacy to deliver practical solutions,” she added.