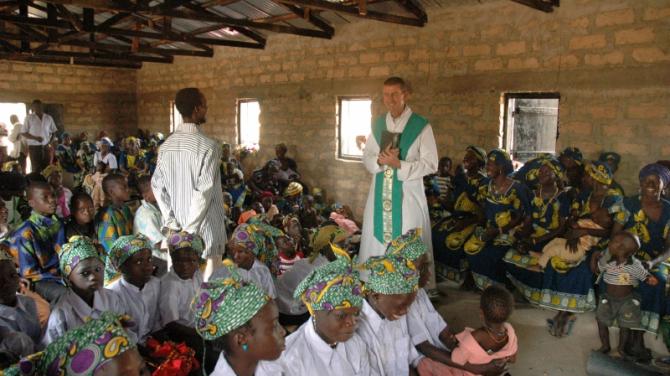 This is a story I never thought I would write and I do so now out of duty and dire necessity.

Many, many people have helped build the schools in Africa, at the heart of it all Father Donall O’Cathaine SMA and the African Sisters of Our Lady of the Apostles.

Father Donall is now fifty seven and he has served in this land for more than thirty years.

Our Saint Mary’s Schools’ project started with nothing and now, more than a million pounds later, our schools are built, paid for and succeeding.

Saint Mary’s Primary and Saint Mary’s Secondary and the Health Clinic stand on a site in the African Bush that is larger than two Croke Parks. More than one thousand children, boys and girls, are being taught where no education existed before. Our first children who entered as little more than babies have now graduated from Saint Mary’s Secondary, and some have gone through Nursing College and have taken their degrees.

The children will tell you:

They have dreams and their dreams are being fulfilled.

So, what’s not good about this story and why did I never think I would be writing these words?

You will note that I am no longer speaking of the exact location of our wonderful work.

The absence of location is to protect the schools, the children and their families, for there are bandits and kidnappers who are ever-ready to attack.

The crooks will enter villages on motorbikes, they are heavily armed and will “shoot up” the town. Rape and pillage are the norm in these circumstances.

Think Vikings on motorbikes armed with AK47s and you begin to understand.

This is where Father Donall O’Cathaine of the Society of African Missions works among the people; he shares their lives, their worries and their woes…their happiness too of course.

RECOVERING IN IRELAND…..AT DROMANTINE AND AT SMA HOUSE IN CORK

Donall is home in Ireland for recovery of his health. He has been in Africa for thirty years working in the same area and with the same people and this break home comes after two years away during which he has endured typhoid and malaria.

Nothing new in that, Malaria is his constant companion, the Typhoid, well that is new. To say Donall is poorly is an understatement but he battles on and is insisting he will return to his people in the autumn. He will do this thing, as he says, God willing.

His new Dry Season Literacy Course is well established and developing in the lives of the people.

I suggest the unthinkable.

“Donall what are you going to do? The schools, the people and you are now in the greatest danger from the bandits and they are coming closer all the time. What will happen.”

“God looks after us in all kinds of situations. He has done it time and time again and is still doing it. I will return to Africa in October because the people need me, especially those who are elderly. They have nobody else and it is where God wants me to be. So…that’s it.”

THE WALL AND THE RAZOR WIRE WILL SAVE US

Our schools’ compound is surrounded by a five feet tall wall but now we will make it bigger, add to its height by two concrete blocks…and there will be razor wire on top.

But there is hope. There is the strength that comes from what has been achieved already; there is improved security, and the strong farming community that is beginning to fight back. Recently in a nearby village the families drove away attacking bandits. Some of the attackers were killed and the villagers survived.

There are no police or army in this far-away place. The people are learning to look after themselves against the bandits and the bullies.

But even as I write the pressure is bearing down on them….it is the time for planting. If the planting does not occur there can be no harvest, without the harvest there will be no food for the year to come; there will be hunger and starvation. Such is the life of the people in the African farming Bush-land.

MY APPEAL TO YOU TODAY…HELP ME BUILD THE WALL

The wall will work for it represents security and the bandits will be uncertain of what lies behind it. They will retreat and seek an easier target elsewhere. The pathway of least resistance is their preferred strategy, so, you can see why the wall and the razor wire are important.

We are so very fortunate here in Ireland not to have these challenges to deal with; there are others of course but we do not have to live in mud-hut compounds and cheek by jowl with the threat of violence that could come at any moment.

Against the background of our many blessings I reach out to you and ask you to help. I beg you to help build the African Wall and allow our work to continue and the people to grow, through education, and have better lives.

Just now our schools have closed, a temporary measure in the face of the Covid threat. The OLA Sisters who are our teachers, have retreated to their “Mother House” and will, like the children, return in September. As Father Donall says, ‘God Willing!’

And ‘God Willing’ too the new wall around the school will be there to greet them.

I believe it is good for the heart and soul of man to beg, for good purpose, at least once in a lifetime. I have learned to beg. I did so for the schools and for the work in India.

Now we will build the wall.

The amount needed is estimated at thirty thousand euro and my appeal goes out to all of you or to a single person in our land of prosperity who can give the extraordinary gift of the whole amount. This is a matter of the gravest urgency. It is a project of life-saving importance.