Down end season after Donegal precession 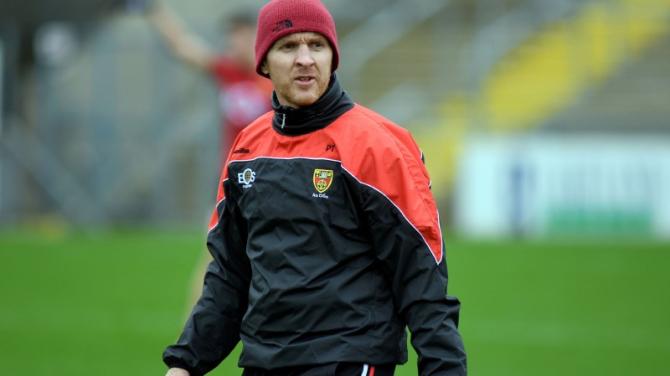 DOWN exited the Ulster Championship after an impressive Donegal put them to the sword earlier today.

Played in Newry’s Pairc Esler in front of 500n fans Down kicked too many wides, 11 in the second half alone and they couldn’t contain a rampant Donegal.

Down made the surprise inclusion of Liam Middleton for his first Championship start. The big Liatroim man offers physical presence and today’s game was an opportunity to see if he could use it. It was also championship debuts on the starting team for Conor McCrickard and Kilcoo’s Ryan McEvoy. There was also a place on the bench for Warrenpoint’s Cormac McCartan for the first time this season.

As expected, Donegal named Michael Murphy at full-forward ahead of the game, who made is return after leaving the pitch injured against Monaghan in the league last month.

Donegal’s goal only minutes before half-time knocked the stuffing out of Down who had played well in patches but were up against a clinical outfit.

Down couldn’t be faulted for effort but too much didn’t go their way and the performance wasn’t good enough against a slick team such as Donegal.

Cory Quinn and Conor McCrickard kicked early chances as Donegal were content picking off scores, with only two wides in the first half and all the Donegal forwards got on the scoresheet.

McHugh stretched Donegal’s lead before back-to-back points from Barry O’Hagan who showed he had the beating of his marker Eoghan Ban Gallagher. In fact, O’Hagan scored all of Down’s points in the first quarter where they trailed by only two points (0-04 to 0-06).

Down were getting it difficult to get onto the ball, Donegal’s well-drilled machine oozed class, with Langan and McBrearty kicking over super points. Down’s Liam Kerr converted a free to leave three points between the sides with 23 minutes gone but after that Donegal pulled away. Down didn’t do anything wrong but they couldn’t get on the ball enough. Each time Celium Doherty got on the ball he looked for a forward pass and Down got two scores from moves he started. But in the last ten minutes of the half Donegal scored 1-06 to Down’s 0-01.

The goal on 34 minutes was a real sucker punch as Mooney had lost possession and substitute Jamie Brennan looked to have taken too many steps before blasting into net. And after that goal it was a matter of by how many points Donegal would win but only after being reduced to 14 men after Stephen McMenamin had picked up a black card.

Down started with optimism but two wides in the opening minute of the restart was punished by Donegal’s point on their first attempt.

However, Mooney lashed into the Donegal net to close the gap to six points and moments later they could have grabbed another goal, but Ryan McEvoy’s close-range effort was blocked. Still, they had shown purpose and a bit of belief. But too many wides brought frustration.

Down trailed 1-09 to 1-18 at the second water-break and while the Mourne men pressed for goals a second one didn’t come.

Instead, it was Donegal’s McBrearty to rammed home the next goal on the hour mark to kill the game off. And Gerard McGovern’s sending off with a straight red card made an already impossible task and forgone conclusion.

Brothers Barry and Darren O’Hagan and James Guinness grabbed points for the Mourne men, but Donegal stretched Down’s defence with substitute Conor O’Donnell sticking over two points and they strolled over the finish line.

For Down, it is back to club football before Division Two awaits in 2022.