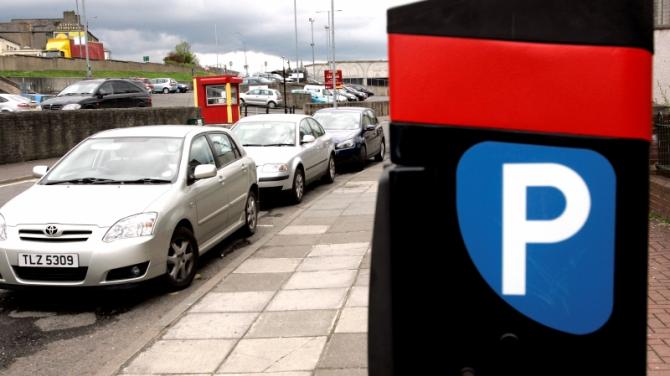 The on-street charged parking is managed by Department for Infrastructure while the off street (designated car parks) is largely managed by NMD Council.

In relation to on-street parking Newry has been designated as a Controlled Parking Zone (CPZ) – one of only two in the whole of Northern Ireland, outside of Belfast. This means it is subject to additional enforcement with four Traffic Wardens operating at any given time and no free parking allowances; unlike Banbridge and Armagh for example, which have concessions, such as one hour free parking.

Newry BID, Lisburn Chamber of Commerce (representing Lisburn, the other CPZ) and Retail NI have come together to try to seek some level of fairness for these two city centres from Department of Infrastructure. The latest lobbying included a briefing to the Infrastructure Committee at Stormont on 30th June.

Eamonn Connolly, Newry BID Manager spoke on behalf of Newry. He said afterwards, “It was a very constructive and useful briefing. We are delighted that the Infrastructure Committee has accepted our concerns and endorses our requests for reform. It was important for us to help MLAs understand that we are not against enforcing illegal parking. This is absolutely necessary. We are not looking for free all day parking as we want discourage long term parking on the streets of Newry. We are however, against Newry being treated unfairly compared to other areas. We are asking for a level of fairness to be applied.

“We welcome the Infrastructure Committee supporting our request for an initial 6 months trial of one-hour free parking to aid covid recovery and help encourage people back into the city centre. This new model would have to be managed by a fair and proportionate number of wardens as opposed to the over-enforcement currently in place now with the dedicated CPZ warden team.

“We are incredibly supportive of sustainable transport moves in Newry city centre. The reality however is, that we do not currently have the public transport system nor electric vehicle charging points set up to support this. Equally we do not have an established continental style ‘cycle to work’ culture.

“BID surveys show on average 95% of people travelling into Newry city centre rely on cars to get them there. We hope this will change in the future, but we have to look at the reality of now. We want to try to support our businesses after the worst eighteen months in most of their trading history.”

Eamonn Connolly outlined the outcomes of the most recent meeting. He said, “We asked for the Department for Infrastructure Committee to accept and support our recommendations; particularly the proposed adoption of a six month pilot of one hour free parking with no return within two hours, underpinned by fair and proportionate enforcement. We have also asked that the Infrastructure Minister, Nichola Mallon be invited to the DFI Committee to discuss the matter as it needs an urgent review.

“DFI officials have also made a number of claims in relation to the benefits of Controlled Parking Zones which Newry BID has challenged with evidence to the contrary. The DFI Committee has also asked their officials to explain these claimed benefits in light of the evidence we have provided.

“Parking along with Rates is cited, in every survey that we carry out amongst are members, as being the biggest barriers to doing trade in Newry City Centre. Ultimately all we are asking for Newry is that our parking enforcement is on a fair and proportionate basis compared to other areas.”