Concern grows for well being of ponies on Mourne Mountains 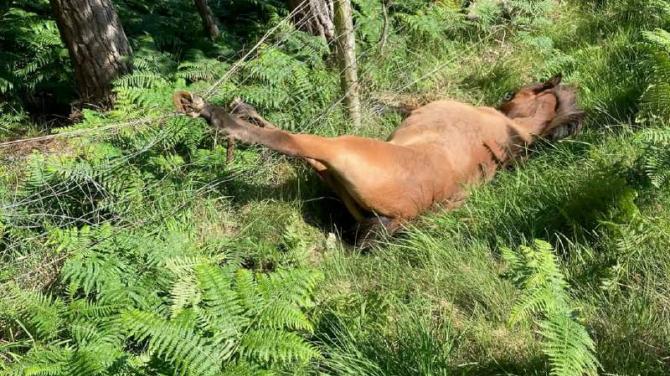 CONCERNS are growing for the well being of wild ponies on the Mourne Mountains.

Pictures have emerged of a foal, so badly injured, it had to be put to sleep.

A spokesperson for One Voice for Animals UK stated: “ Mourne Horse Watch with Crosskennan Lane Animal Sanctuary and Equine Halfway House recently responded to reports of an injured foal.

“The 6-8 week old had an open fracture and needed Northern Ireland Fire & Rescue Service from Newcastle, and the Mourne Mountain Rescue Team to slowly stretcher the foal they named Sunnie down the steep and uneven terrain to be met by David from Kingsfield Equine Veterinary Services.

“Unfortunately Sunnie's leg was too badly broken so he was put to sleep. Whilst his life couldn't be saved, Sunnie was saved from an excruciating death from either gangrene or sepsis, or dehydration from being unable to walk to a water source.

“There are a number of young stallions with injuries from fighting and many young fillies suffering from pelvic injuries from repeated covering (mating) as well as general injuries as they fight with the stallions.

“Some horses are struggling with lung issues - the volunteers can hear their chests when they exert themselves even a little and the numbers presenting these issues seem to be rising. They don’t know the cause - it could be lung worms, disease, or the aftermath of a previous injury or infection.

“This is on top of the genetic jaw and teeth deformations, worms, general health, dehydration, etc described in your previous article.

“Many members of the public who were against the ponies removal have now witnessed the likes of Sunnie and are starting to join the National Trust and members of the police in understanding and supporting the sanctuaries' efforts to rescue the horses.

“However some officials still say that the horses are “fine” and want them to remain so whilst the volunteers are struggling to get permission to access the land more animals may die.

Meanwhile the sanctuaries are full and Crosskennan Lane has so far only raised £21,000 towards its target of £100,000 to purchase nearby land to relieve the pressure of 50 equines on their current 3 acre site.

The public can help in three ways:

1. Report sightings so the volunteers can track the movements of each herd and identify any pattern in the movement in order to plan a rescue.

2. Share the Mourne Horse Watch Facebook page posts. It only takes a second and it makes all the difference if it reaches someone who can send in a sighting or donate.

3. Donate if they can. Every round trip to the Mournes - often just to check the ponies are okay - is a tank of petrol and there are food and vet bills. There is a fundraising page https://www.peoplesfundraising.com/fundraising/mourne-mountain-pony-rescue

or people can contribute to the vet bills directly at https://www.kingsfieldequine.co.uk/pay-online using the