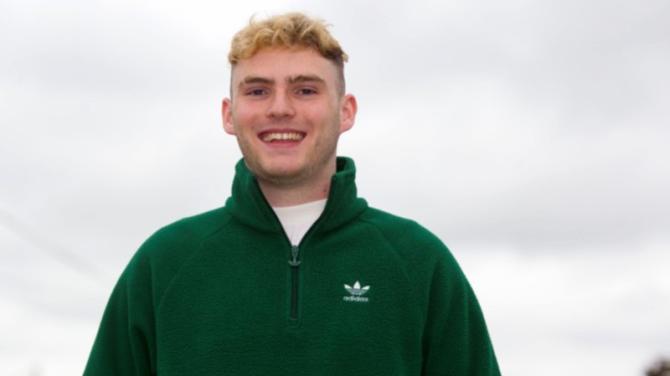 JOHN Reavey isn’t a lad who is going to let the grass grow under his feet.

While his film The Reavey Brothers is doing the rounds of the various film festivals, ahead of its release, he could be forgiven for resting on his laurels and waiting for the plaudits to follow.

Instead, he holds down a full-time job for a London Premiership club, while chasing the dream of directing.

John was back home in Whitecross recently, so I called out to see the 5ft 11.5 young lad. He says the half inch matters.

John is director and writer of the short film which tells the story of his three uncles, Brian, Anthony, and John, who were murdered in their Whitecross home on January 4, 1976, by the so-called ‘Glenanne Gang.’

Those horrible events have never been forgotten in the Whitecross community, but young Reavey felt it was a story that needed to be told to a wider audience and the film focuses on his uncles.

“That was a question I asked myself a lot. Why did I want to tell this piece and I realised that I had told the events to my friends growing up, my mates in London growing up and it clearly doesn’t have the exposure that it needs?

“It is mental that people at my age, who live only ten minutes over the road don’t know that this sort of thing happened. People need to learn from it and stories like this can be forgotten if we don’t keep talking about them. I hope when the film comes out that people will know that these things went on not just to my family and families in this area, but to families all over Northern Ireland at the time.

“There are so many people out there with stories like mine and hopefully they will feel a bit of comfort in watching a piece like this.”

The film is expected to be on wider release to the public late this year on early next and the young filmmaker is hopeful for some positive feedback from the film festival organisers.

“We finished the final cut in March after finishing filming in October, I was a long editing process, but everyone was doing it on a voluntary basis, so it was always going to be a tricky one,” said Reavey.

“The whole colour grading process, all of the sound was done post, so it was a proper production not any quick turnover. We didn’t want to release it to festivals until it was ready. It was finished and the next day the film was sent on the festival run, which is class.

“We are waiting to hear back sometime at the end of the summer. It would be unreal if we were considered for any of them, so I have my fingers crossed but at the end of the day I am over the moon with the project. I have watched it so many times and I can’t wait for the world to see it.”

John revealed that he has another short film that is due for release later this year, but he can’t say too much about it.

“It is secret but the one thing I can tell you is that I documented myself taking part in what going to be deemed an illegal activity this year,” said Reavey.

“It is getting banned and I have done it before the ban comes into place.”

The 23-year-old lives in London where he works as a full-time video producer for Premiership side West Ham United. That would be many peoples ideal job, but John wants to express his many talents across a wider spectrum.

“I’m luckily enough I have this class job at West Ham, and it is so many peoples dream, and it is phenomenal the opportunities I get. I meet so many crazy famous people every day, but I want to do my own pieces and that is the dream I am chasing while doing a full-time job.

“It is hard balancing both things and a times I feel I am burning myself out, but I am getting better at managing that and realise that what I am doing is more than enough for the moment and keep at it.”

A confident, smart, positive, and compassionate, with a wise head on young shoulders and a fantastic work ethic, there is no reason John can’t peruse his dream to direct short films, documentaries and music videos.

A former pupil of St Paul’s High School Bessbrook, it was a course at the school that helped shape his path into the creative arts, although he got a lot of encouragement at home too as his dad Paul is an excellent poet and Mum Bernie can hold a tune. And his advice to anyone looking to get into the film industry is to be bold and go the extra mile.

“Honestly, it is a path you need to do on your own,” John said.

“It is becoming less available at schools; I was so lucky that St Paul’s Bessbrook offered a filmmaking course. I’m not sure if that course is still available within the school building now.

“I would encourage anyone who has an interest in filmmaking or media in general and look at the courses available, even if it means going to a different school for them. It is so worth putting the grind in on your own.

“When you are at school sometimes you don’t want to go the extra mile, move to a different school, you want to stay where your friends are, and it might seem like hassle to enquire about these courses. But there are so many jobs from these courses nowadays and you can get your foot in the door. it is never too late to start, you could switch courses at Uni, or make films at home and send in.

“There are so many calls for new filmmakers and short courses online and they are a good place to start.”

The Reavey Brothers film is expected to be released in December or January.