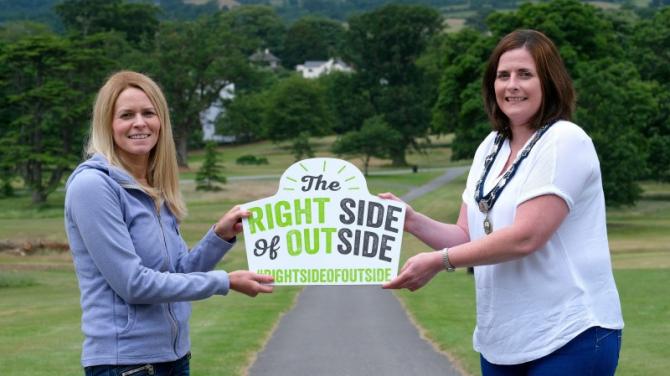 NEWRY, Mourne and Down District Council is teaming up with Walk NI to champion its campaign #RightSideOfOutside as we approach the summer months to encourage those visiting rural areas within the District to do so in a safe and respectful way.

Whilst Walk NI and the Council have been delighted to see the increasing numbers of people choosing to visit the many outdoor sites in Mournes, Ring of Gullion and Strangford Lough and Lecale, it has also had to overcome the growing negative impact caused by those that don’t stay on the Right Side of Outside.

Over recent months, there has been a significant rise in irresponsible behaviour in the outdoors such as littering and dog waste being left behind which is disrupting our natural beauty spots.

As well as the issues with dog waste and littering, trees have been uprooted and used for firewood, livestock and wildlife have been attacked by dogs and irresponsible parking has impacted on the landscape and local people.

Councillor Oonagh Magennis, Vice - Chairperson at Newry, Mourne and Down District Council said: “As the demand for car parking spaces rises, we’re seeing an increase in roadside parking. This not only causes damage to verges, but often blocks access for local residents, the farming community and emergency services.

“On the mountains, people are stepping off the footpaths as they seek to distance themselves from other walkers but are then often continuing to walk alongside the paths rather than stepping back onto them again, causing damage to the fragile vegetation.

“We’re used to wild campers who leave no trace, but now we are seeing an increase in campers who have less experience. We’re finding a lot of litter, even entire campsites for us to clear away – food waste, sleeping bags and tents included.

“Campfire remains are becoming a common sight as well. The burnt circles on the ground are not only an eyesore but also a serious fire hazard. The recent fires in the Mournes have had a devastating and ever lasting effect on the local area and the wildlife that call it their home. Sadly, this level of damage is not sustainable.”

Beverley Magowan at Walk NI adds: “We love that more people than ever have been able to enjoy the outdoors and exploring the amazing landscapes across Northern Ireland, but unfortunately not everyone is leaving the outdoors as they find it.

“It is important that if you are choosing to explore the beauty of the District that you protect it for future generations. Take your dog waste and litter home with you, park your car in a designated parking space to avoid blocking access, wear the right clothes for the terrain and sturdy footwear, avoid bringing your dog near livestock, avoid lighting fires and only camp in a designated area.”

‘The Right Side of Outside’ campaign will continue to roll out its messaging over the coming weeks as the outdoors are set to become even busier with the approach of warmer weather and the school holidays.

For more information on the campaign visit WalkNI.com or search #RightSideOfOutside