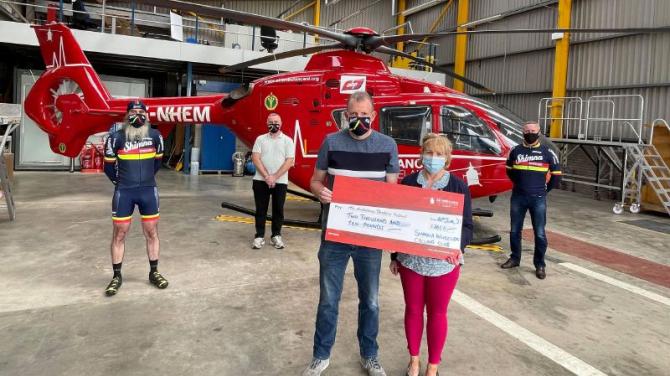 ON the 15th December 2020, Martin Keown (58), from Castlewellan was cycling through the Dromara Hills with his fellow Shimna Wheelers club member, Malachy Mulholland.

The enjoyable day out turned to tragedy for the keen cyclists when Malachy glanced behind to see Martin tumble off his bike. Martin had suffered a sudden cardiac arrest while travelling at a speed of 30mph.

A runner on the road who also witnessed the incident called 999.

Fortunately, Malachy had been taught CPR while working with the Down Council years before the incident occurred. Malachy rushed to his friends aid and was able to perform life-saving CPR for approximately 18 minutes before the emergency services arrived. Due to the severity of the incident the Helicopter Emergency Medical Service (HEMS) was tasked to the scene, to preform critical care interventions on Martin before he reached hospital.

The Air Ambulance NI helicopter carrying the HEMS crew was able to land nearby in a remote landing spot, where a Kilcoo man offered the HEMS team a lift in his pick-up truck to bring them to Martin’s side and join their Northern Ireland Ambulance Service (NIAS) road crew colleagues, already on scene. The HEMS team put Martin in an induced coma before bringing him to the Royal Victoria Hospital (RVH) in Belfast.

Martin’s wife Roisin said, “I fear that without Air Ambulance NI, Martin wouldn’t have received the critical care interventions needed to save his life.”

Martin spent 9 days in an induced coma at RVH and suffered a host of injuries including 9 broken ribs.

“Thankfully due to the phenomenal efforts from the local community that day alongside the emergency services, Martin’s life was saved, and he was even able to make it out of hospital in time to celebrate Christmas at home with his family. Although Martin is still in recovery, he is very grateful to be alive and wishes to thank everyone who came to his aid that day and those who have provided continuous care and rehabilitation including the ICU team at the Royal Victoria Hospital and the Down Rehab Cardiac Team in the Down Hospital.

Martin and Malachy are both members of the Shimna Wheelers Cycling Club. After the incident, the Shimna Wheelers chose to host a Christmas Run in aid of Air Ambulance NI to help the crew continue to provide life-saving pre-hospital care to people just like Martin. The club raised an outstanding £2010 for the charity and Martin was able to present the cheque in person while visiting the Air Ambulance NI base.

HEMS Operational Lead Glenn O’Rorke said: “Martin’s outcome could have been entirely different if his friend Malachy had not administered CPR as early as he did. When someone suffers from a cardiac arrest, they urgently need medical intervention to help them get blood and oxygen to the vital organs. Friends, family, and those who witness a serious incident are often the first link in the chain of a patients’ survival when the worst has happened. If you find someone not breathing, I urge you to call 999 immediately, if the patient needs CPR the ambulance controller will guide you through it with simple instructions, even if you haven’t received official CPR training. Your actions could be vital to saving their life, preventing brain damage, and buying time until the medics arrive. Patients are at the centre of everything we do and we are extremely pleased that Martin is recovering. We would also like to extend our gratitude to the Shimna Wheelers Cycle Club. Their generous donation will help us reach future patients who like Martin, find themselves in desperate need of critical pre-hospital care.”

The charity Air Ambulance NI, in partnership with NIAS, provides the HEMS for Northern Ireland. The service brings urgent medical assistance to anywhere in the province, operating seven days a week for 12 hours per day. It can get to anywhere in Northern Ireland in approximately twenty-five minutes. From inception to May 2021 the medical crew have been tasked 2,266 times. The service was called out on 229 occasions from January – March 2021, an increase of 30 % on the previous year and a 73% increase from 2018.

The HEMS team attend patients who are seriously ill or injured, bringing emergency pre-hospital care direct to the casualty with the aim of saving lives, brains and limbs. The charity cherishes connecting with former patients and patient families. If you, or one of your family members, have been treated by the HEMS Crew you can get in touch with Air Ambulance NI by calling 028 9262 2677.

Air Ambulance NI needs to raise £2million each year to maintain this service so public donations are crucial. Fundraising has been severely impacted by Covid19. If you would like to support this life-saving service, there are a number of exciting upcoming events you can participate in including a Dragon Boat Race, the Belfast City Marathon, abseils or you could organise your own event with the charity’s support. Find out more and sign up to a challenge that suits you by visiting www.airambulanceni.org alternatively you can contact the charity directly by emailing info@airambulanceni.org or calling 028 9262 2677.