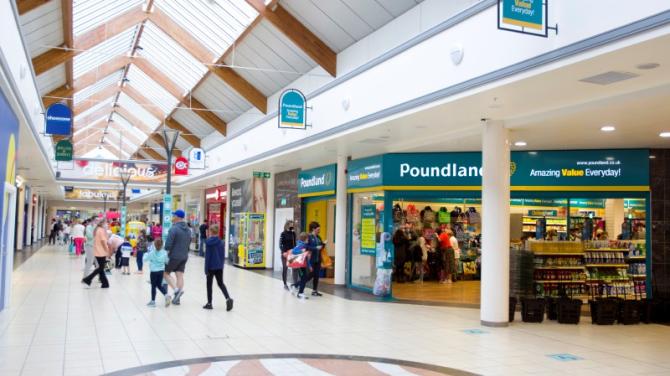 SHOPPERS in Newry can look forward to having an extra £100 in their back pocket this September thanks to the High Street Scheme which is being introduced by the economies minister Gordon Lyons.

The scheme, which minister Lyons intends to act as a kick-starter to reinvigorate the local high street retail economy post covid 19, will see every citizen in Northern Ireland over the age of 18 currently on the electoral register receive a “shop local” gift voucher courtesy of the Pre-Paid Financial services company that can be spent in any local retail outlet throughout the Newry, Mourne and Down District Council area.

Welcoming the scheme with open arms is Newry BID’S very own Eamonn Connolly who states that the motion will act as a stimulus for people to “invest not onlyin local businesses but also in their local communities.”

“The pandemic has increased the number of people who are shopping online with people also becoming more reluctant to go back out onto the high street post lockdown, so naturally we in Newry BID are delighted that minister Lyons has given the green light to this scheme which will act as a stimulus for people to invest in not only local businesses but also their local communities.

"We in Newry BID were involved in the process of shaping this scheme and I will freely concede that it is difficult to come up with a set of parameters for a measure like this that will suit everyone.”

Mr Connolly urged anyone one who is not already on the electoral register to subscribe to it as this only precondition to be able to avail of the £100.00 gift voucher.

"We believe that this is the fairest way and we would encourage people who are not on the Northern Ireland electoral register to register as this is the only prerequisite to qualify.

“Naturally we would also support people to shop local and support local economies as they recover post Covid-19.

Mr Connolly cites a scheme similar to the one now being introduced by the executive as a rime example of how this initiative can help rejuvenate the local economy in Newry.

"A scheme similar to this one was also piloted in Jersey and what we found was that in addition to the free amount of money that people had been given, the shop local voucher also acted as a stimulus for people to spend more on the high street. The scheme also found that people were predisposed to spending the vouchers in both retail and hospitality, two of the sectors that were hardest hit during the pandemic.

Reiterating Mr Connolly’s enthusiasm for the scheme is , Cathal Austin, manager of The Quays Shopping centre. He believes the initiative will be “a good starting point in reinvigorating the local economy in Newry which has suffered immensely as the result of the Coronavirus outbreak.

“What I will say about the High Street Scheme is that it is a good starting point. While I have seen some negative commentary regarding a scheme such as this like whether or not the more affluent in society should be entitled to a free cash payment of £100.00 in my view this is a necessary measure to encourage every member of the public to put their hands in their pockets and support local high street businesses that are in Newry as they recover post Covid.

"High street retail supports an awful lot of jobs and a lot of these roles are vital jobs in terms of the support they provide to families in the Newry area. “It is very often the case that retail jobs are putting the bread on the table for people so it is vitally important that we do something sort of kickstart bricks and mortar retail again while simultaneously weaning people of online retail which has surpassed high street retail during the pandemic.

"This scheme is coming at the right time of the year, hopefully it will get people thinking about Christmas and get them out and about and spending. In addition to the one hundred and forty-five million pound support the scheme will provide to high street retailers it will also encourages consumers to spend their own money providing additional financial support to local businesses.”

The scheme, which the Department of Economies minister Gordon Lyons recently announced will be administered by the financial company Prepaid Financial services will see every citizen in Northern Ireland receiving a prepaid card with one hundred pounds loaded onto it to be spent on the high street. The ultimate purpose of which will be to spark a rebirth in high street shopping in Newry which has been eclipsed by online retail in the wake of the Covid-19 pandemic.

While Mr Austin welcomes the scheme with open arms as a necessary starting point to revitalize the high street economy that has been decimated by the Covid 19 pandemic, he is also keen to stress that the measure should only be considered a starting point on the long road to recovery for high street retail.

“However, this scheme that has been introduced by the minister is only a start in helping high street retail businesses in Newry recover. There is still a lot to be done. A one-hundred-pound voucher is not going to solve all the problems that high street retail outlets in Newry have had to deal with because of the pandemic.

"It will be interesting to see what the newly assembled high street task force will come up with to help reinvigorate the local economy in Newry and elsewhere. The task force needs to get out into the community and talking to retailers and talking to businesses to see how we can move forward post Covid.”

Mr Austin also emphasised the importance of the financial contributions that high street retail outlets make to the local economy in Newry, citing the fact that if local businesses stopped paying rates, he believes there would be a substantial gap left in the local economy.

“There is a lot of money invested in retail in Newry. It is very often overlooked in so far as the money that retail puts into the economy. Not only people employed directly in stores but also all the services that go into retail. The lorry drivers that provide stock to be sold on shop floors, the electricians, the fire alarm crews. All of these are local businesses that will benefit from people shopping in the high street.

" I mentioned this fact to the finance minister Conor Murphy once that Amazon doesn’t pay rates in Newry, but bricks and mortar retail does. “The contribution that high street retail makes to the local economy in Newry shold not be underestimated as it is absolutely vital that the retail economy is both reinvigorated and receives constant support to maintain itself.