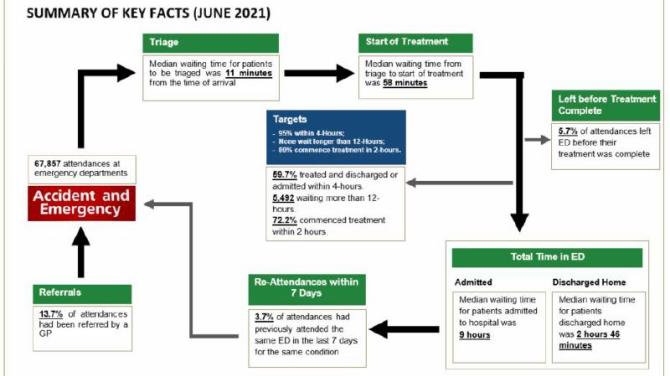 CRAIGAVON Area reported the longest waiting time between triage and start of treatment in NI, with 95 percent of attendances commencing treatment within 7 hours 57 minutes of being triaged; 5 hours 3 minutes more than the time taken in June 2020 (2 hours 54 minutes).

At Newry’s Daisy Hill Hospital over 60% of patients were seen within the four hour waiting performance time.

In Craigavon, the average waiting time before the commencement of treatment during the month of June was three minutes short of eight hours.

Figures reveal that 40% of those who attended ED in Craigavon were categorised as ‘urgent’; with 28.5% in ‘Immediate/ Very Urgent’.

In Daisy Hill, during the same month, the recorded median waiting time was four hours and 59 minutes.

Just over 42% of those whop attended the Newry facility deemed to be in the ‘Urgent’ category with 25.7% in ‘Immediate/Very Urgent.

These latest figures are included in the Department of Health (DoH) published statistics on the time spent in emergency care departments (ED) throughout Northern Ireland during the months of April, May and June 2021.

The statistical bulletin presents information on all new and unplanned review attendances during April, May and June 2021. It details information on the time spent in EDs during each of these months including; the monthly performance against the DoH emergency care waiting times target for EDs and the time waited for key milestones during a patient’s journey through ED, whilst they are being cared for in an ED, including the time to triage and time to start of treatment.

• During June 2021, 5.7% of all ED attendances left before their treatment was complete.

• During June 2021, 3.7% of the 67,857 ED attendances were unplanned review attendances who had returned to the same ED within 7 days of their original attendance for the same condition.

• Almost three quarters (72.2%) of patients attending EDs commenced their treatment within 2 hours of being triaged, compared with 86.6% in June 2020.

Time to Start of Treatment:

• During June 2021, the median waiting time from triage to the start of treatment by a medical professional was 58 minutes, with 95 percent of patients receiving treatment within 5 hours 21 minutes of being triaged.

• The median time patients who were discharged home (not admitted) spent in a Type 1 ED was 3 hours 12 minutes in June 2021, 35 minutes more than the time taken during the same month last year (2 hour 37 minutes).

• The median time patients who were admitted to hospital spent in a Type 1 ED was 9 hours 9 minutes in June 2021, 2 hours 56 minutes more than the same month last year (6 hours 13 minutes).

• During June 2021, the Ulster reported the longest median waiting time from arrival to admission (11 hours 56 minutes), whilst the RBHSC reported the shortest time (4 hours 34 minutes).