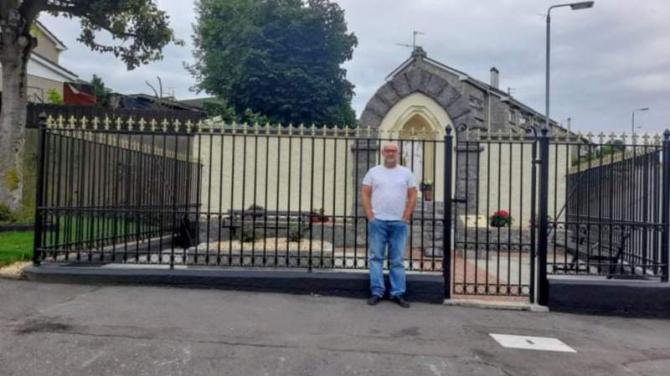 Today at Church Street, Newry a marble statue of Christ sculptured from rock quarried in the city of Carrara in the province of Massa and Carrara in the Luningiana, the northernmost tip of modern-day Tuscany, Italy can be found in an archway of Newry's finest granite.

Known locally as the Church Street grotto we look back at events in Newry and Dublin which inspired local people to construct the holy shrine three years after a final public mass in Dublin which was attended by quarter of the population of Ireland.

On Monday 23rd May 1932 the Newry Urban Council gave permission for the erection of arches at Monaghan Street and Bridge Street Bridges, for celebrations and a procession in connection with Eucharistic Congress.

Also permission was granted by the Council to fly the Eucharistic flag on Newry Town Hall but was not acted upon amidst local controversies about flags.

The Procession itself was held in Newry, Sunday 5th June and a report in the 'Derry Journal read:

'One of the largest and most impressive religious processions witnessed in Newry for several years took place on Sunday in connection with the Eucharistic Congress.

The procession, which included priests from all parts of the Diocese of Dromore, members of the Holy Family, women's sodalities, and schoolchildren, marched eight deep, starting from the Cathedral and numbering several thousands.

Hymns were sung by the processionists all along the route, which was lavishly decorated with bunting and flags, while two arches spanned the Monaghan Street and Dublin Bridges. The procession was watched by large and interested crowds from various vantage points and shipping at the Albert Basin was decorated in honour of the occasion.'

The final ceremony of the 31st International Eucharistic Congress was held in Dublin in June 1932 when Ireland was then home to 3,171,697 Catholics, chosen on this year to coincide with the 1500th anniversary of St Patrick's arrival.

Dublin was decorated with banners, bunting, garlands, and replica round towers with seven ocean liners moored in the port basins and along 'Sir John Rogerson's Quay.' The vessels acted as floating hotels and could accommodate from 130 to 1,500 people on each.

The Blue Hussars, a ceremonial cavalry unit of the Irish Army formed to escort the President of Ireland on state occasions first appeared in public as an honor guard for the visiting Papal Legate representing Pope Pius XI.

The final public mass of the congress was held on 26 June in Phoenix Park with approximately 25% of the population of Ireland attending.

The 'Dundalk Democrat' described the event:

'Here men and women are proud to give evidence of their Faith: proud of being sons and daughters of the dead and gone Catholics who kept the flame alive in evil days of persecution and spoliation. The men and women of long ago, from the high place in heaven won by their heroic piety must have looked down upon this glorious scene with serene happiness and benediction.'

In the 'Catholic Standard' from 1st November 1935 it reported:

'Newry Shrine Erected In Commemoration of the 1932 Eucharistic Congress' - A statue of Christ the King, erected in commemoration of the 1932 Eucharistic Congress, at 'Pound Street' Newry, close to Monk's Hill. It was unveiled and blessed last Sunday (27th October,1935) by his Lordship the Bishop of Dromore, Most Rev. Dr. Mulhern. The shrine, which is on the site given by Mrs. Magennis, Priory House, is of Newry granite, and the statue itself is of Carrara marble.'

In October 2003 the Church Street grotto was in the news again when the 'Newry Reporter' reported upon the unveiling of a new plaque with former Council Mayor Jack Patterson officiating at the ceremony.

The plaque was in memory of Mary Ellen Lundy who attended to the grotto in her lifetime and those in attendance at the ceremony were Mary Ellen's sisters, Margaret Hollywood and Bridie Weir along with Father Terence Rafferty and Father Andrew McMahon.