Beattie call for action on heritage during visit 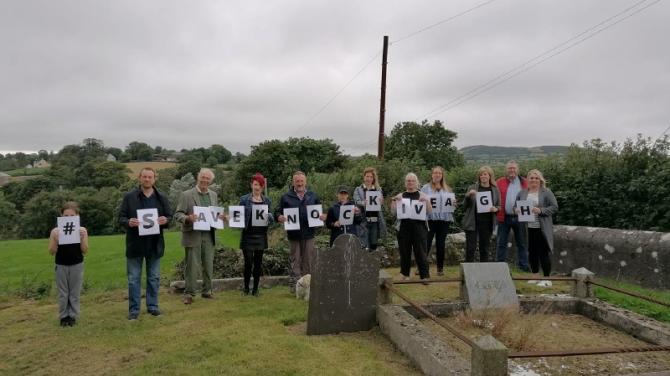 LOCAL campaigners, ‘the Friends of Knock Iveagh’ welcomed Doug Beattie, leader of the Ulster Unionist Party, and Councillor Jill Macauley to Rathfriland this week to discuss the issues surrounding the controversial wind development at Knock Iveagh, and to learn more about the area’s impressive history.

In 2017 an industrial wind turbine was erected on Knock Iveagh, which is the location of a large, protected (scheduled) burial cairn older than the pyramids. The tomb is at the centre of a ‘ritual landscape’ comprising many monuments, and is believed to have been used as an inauguration site for early medieval Irish kings. Government archaeologists were not consulted by DoE Planners about the proposed development, in breach of planning laws.

The decision to grant planning permission was made in 2013 before planning powers were devolved to local Councils. Government advisors, the Historic Monuments Council, recommended that the planning permission be revoked in 2017, prior to the completion of the development. Multiple enforcement cases have been opened by the Council against elements of the unlawful development but despite widespread agreement that the turbine is damaging to the historic site, no action has been taken to remove it. Developers have so far received at least £100,000 in ROCS payments due to a flawed Stormont renewable energy scheme which did not require proper planning permission in order to qualify for payouts.

Major Beattie urged Stormont Ministers Nichola Mallon and Deirdre Hargey to intervene to ensure the protection of the site in a recent press release:

‘I know that there are many pressing issues to be dealt with here in Northern Ireland. Even so, this should not stop us addressing the irreparable degradation of our shared heritage or supporting the efforts of community groups like Save Knock Iveagh.

This important Neolithic site continues to be degraded, its unique associated ritual landscape compromised. Yet this is not an isolated case as other important heritage sites right across this island are also being destroyed. The wider historic landscape is endangered through indifference, incompetence and red tape.’

In a recent tweet, the Friends called on more political leaders ‘to speak up on the destruction of our shared heritage’.

Major Beattie also accused the Department for Communities, who have responsibility for heritage in Northern Ireland, of remaining ‘deafeningly silent’. In January 2020, it was revealed that due to a number of prior failures, the Department for Communities, which looks after protected monuments, had ‘severely - potentially fatally - compromised’ the success of any legal action it might bring in the future.

In November 2020, ABC Council voted to ask the Department for Infrastructure to use its powers of discontinuance because of the ‘adverse environmental impact on the integrity of the setting of the scheduled monument at Knock Iveagh and the visual amenity and landscape character of the site’.

However, Minister Mallon declined to intervene, and has also refused numerous invitations to meet the Friends. The Council has since filed for leave for the Judicial Review of this decision. Recently a judge awarded additional time for the various parties involved to discuss matters.

‘The lack of progress on the KI turbine issue is very disappointing. We need more urgency and action from the Department for Infrastructure. Our heritage is incredibly important.’

‘It is now time for action - the local community want to see the discontinuation of the planning permission for the turbine, all unlawful development removed, and the landscape restored to its former condition without delay.’