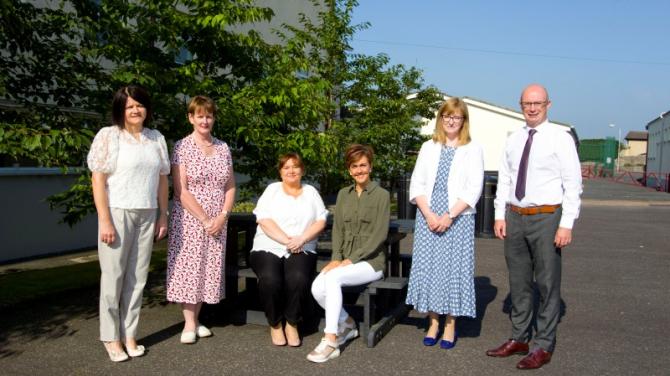 In recognition of this significant milestone, St Mary’s last week welcomed back some former Principals, staff and pupils.

They also recognised the long service to St Mary’s by two current members of staff Miss Marion McAteer, who has been a member of the Administration Team for 50 years, and Mr Eugene Magee who has been a teacher in the school for 40 years.

St. Mary's was built on very rocky ground which had been purchased from a family by the name of Maguinness. The family lived in a large house called "Priory House" named thus because the Dominican Fathers once lived there. This house has since been demolished.

By the time of the opening of St. Mary's neither St. Mark's, Warrenpoint nor St. Paul's, Bessbrook were built so pupils came from a very wide catchment area, Newry, Warrenpoint, Burren, Clontifleece, Rostrevor, Killowen, Barr, Saval, Sheeptown, Crowhill, Hilltown and Killeavey. This catchment area has been reduced considerably since the opening of both of these schools.

It took three years to build St. Mary's, without the extensions they have now. Felix O'Hare & Co.Ltd. was the contractor and the extensions were built by Rodgers of Crossmaglen.

On the 1st September, 1961, St. Mary's opened it's doors and 644 pupils were enrolled. Mass was celebrated by Most Rev.Dr.O'Doherty R.I.P in the school Assembly Hall and afterwards the school was blessed.

There was no official school uniform at the time. When it was decided to have a school uniform the colours chosen were grey and blue and later these were changed to maroon and pink.

Pupils sat for the Junior Examination and, if successful, transferred to one of the local girl's Grammar schools to continue their studies. The past pupils of St. Mary's are to be found in all walks of life.