High praise for bathroom and kitchen replacement scheme in Mourne 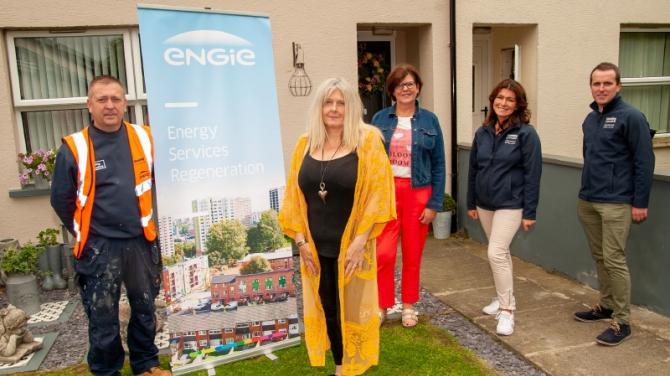 TENANTS in Churchview Close, Kilkeel and surrounding areas in Mourne have had their homes modernised, courtesy of the Housing Executive.

Work has finished to the planned improvement scheme, which saw 31 properties in the area receive new kitchens, bathrooms and rewiring.

A total of £261,408.63 has been invested with the upgrade programme, which was carried out by contractors, Engie Regeneration.

Commencing on 24 May, work was due to be completed by 20 August and was finished two weeks ahead of schedule on 6 August.

Kilkeel resident, Lorraine Pugh from Churchview Close has had her kitchen and bathroom upgraded as part of the scheme.

She said; “I’m delighted with my new kitchen and bathroom and it has really modernised my home. The workmen were really nice too and worked to a high standard.

“My kitchen and bathroom have also been rewired and I have also got new light switches which has totally transformed the area.

“There was also good communication between myself and the project manager ahead of the work being carried out – with a really thorough consultation too.

“I was also able to choose the colour for the cupboards and the areas in my home have now been completely refurbished, surpassing my expectations.”

Liam Gunn, the Housing Executive’s South Down Area Manager said he was delighted with the feedback from tenants following the recent scheme that covered Kilkeel, Annalong, Ballymartin, Warrenpoint and Newry.

He said; “It is always good to hear a really positive response towards recent work that has been carried out in our tenants’ homes.

“Our contractors, Engie Regeneration have worked very hard to transform and modernise the kitchen and bathroom space in these homes, much to the delight of our tenants.

“Well done to all who have been involved with this scheme and thank you to our tenants for their patience and perseverance during both the consultation process and while work was underway.”