Food Poverty "going to get worse for families" 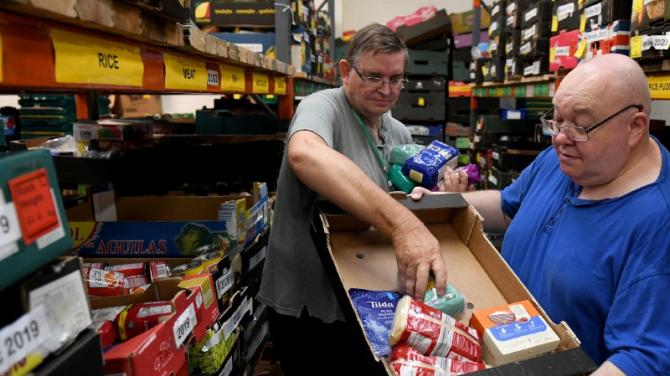 THE amount of families having to avail of the use of foodbanks in Newry has increased by such a substantial amount since the onset of the Coronavirus pandemic leading one representative form “The Larder” foodbank Newry to state that they believe the “situation is going to get worse for families before it gets better.

The representative from the foodbank located on St Mary's street in the town, claims that the increase in demand for their services because of the pandemic has resulted in the larder now having to open five days a week to service people as opposed to the previous three

"There has been a huge increase in the amount of people availing of the services we provide here at The Larder food bank.

“The amount of people in need of food and other essentials has increased to such a degree because of the pandemic that we have had to increase in the number of days we are open in the week from 3 days up to five. We are also working weekends as well. “I am also afraid the situation may only get worse for families in Newry before it gets better.

"We are here Monday through to Friday 11am to 3pm and we have noticed a larger number of families using the foodbank. The demand that the Coronavirus has placed on the Larder foodbank has been so intense that we do actually need food and so we would like to appeal for more people to donate dry foods and hygiene products if they can.

"Our main drop off points throughout The Newry, Mourne and Down District council area both within the town, those being both Tesco's in Newry and Fiveways in Newry. The Larder is a dry foodbank so we are currently in need of dry food as well as dry toiletries and hygiene products.”

The Spokespearson from the Larder believes the economic damage caused by the ongoing pandemic as the primary reason as to why they believe there has been such a marked increase in the amount of families using foodbanks throughout The Newry, Mourne and Down District Council area.

"The Coronavirus pandemic has had an adverse effect on the economy and this has resulted in more people losing their jobs and becoming furloughed, so their income is down and they cannot afford life's basic necessities. What we have also noticed is an increase in the amount of people accepting donations for uniforms and a lot of schools have been donating their own uniforms for families in the local area

Commenting to the growing levels of food poverty in the area The SDLP MLA for Newry, Mourne and Down Justin McNulty has stated that the situation is completely “indefensible”. The Sought Down MLA cites a report released by the family resources survey which states that up to 1 in 10 children in Northern Ireland could be facing food insecurity.

In addition to the economic damage wrought by the pandemic, Mr McNulty attributes the growing levels of foodbank usage in the area as the direct result of the failures of universal credit roll-out.

““Ever since the draconian imposition of Welfare Reform, the SDLP has warned that many households here would be pushed into food insecurity. The increasing reliance on foodbanks is evidence of the inherent failures of the Universal Credit roll-out. Now, individuals and families here have been hit a double blow with the pandemic resulting in an historic level of foodbank usage.

Mr McNulty states that not only is the ever increasing reliance on foodbanks a direct result of the effects of poverty and deprivation but owing to the ever increasing costs of “buying healthy” this could also have an adverse effect on the overall physical and mental wellbeing of children in years to come.

“Recent figures from the Family Resources Survey revealed that 1 in 10 children in Northern Ireland are living in ‘food insecure’ households. These children are not just suffering from the effects of poverty, but given the higher costs associated with ‘buying healthy’, they are also at greater risk of worse outcomes in terms of physical and mental health.

It is Mr McNulty’s belief that if the trend of families relying on the services provided by foodbanks in the area continues to increases than this will result in the executive being unable to deliver on its promise of a fair and compassionate society which was a cornerstone promise of the New Decade, New Approach agreement that reinstated Stormont after nearly a three-year long hiatus.

“These figures are a damning indictment of the DUP and Sinn Féin in Government, who have led the Executive here for over a decade. Evidently, ‘a fair and compassionate society’ as promised under New Decade, New Approach is fast slipping from the Executive’s grasp when households here are struggling to put food on the table. There is no greater signifier of failure in governance than the inability to provide for children, our most vulnerable citizens. While the DUP & Sinn Féin have been dithering, SDLP members from across the North have been delivering initiatives to tackle food poverty and making a difference in local communities. Closing his commentary on the ever increasing problem of food poverty in Northern Ireland, the SDLP MLA called on the communities minister Deidre Harghey to urgently progress the executives anti-poverty strategy and work with the other members of the executive to urgently address this issue so as to decrease the number of families in the North having to rely on foodbanks.

“Communities Minister Deirdre Hargey needs to urgently progress the Anti-Poverty Strategy and work with her Executive colleagues to immediately address this issue.”