Reavey to meet with Irish TD'S before Westminster protest 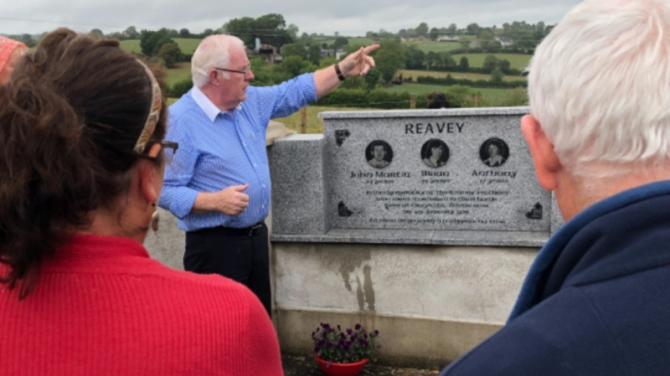 EUGENE Reavey will be amongst a group of victim's representatives from across Northern Ireland that will been in attendance at a meeting with TDs from the Republic of Ireland to discuss the ongoing controversy surrounding the introduction of a Statute of Limitations for troubles related crimes.

The Statute, which has drawn universal criticism from all victim's welfare groups in the North, is due to be passed into legislation by the Westminster Parliament this October. If the motion does receive royal assent, then it will render all those who have, or are suspected of having committed criminal atrocities throughout the troubles immune from prosecution.

Explaining the rationale behind the meeting, Eugene, whose own three brothers died at the hands of the notorious Glennane Gang in 1976, states that he and the other victims campaigners hope they can persuade the representatives from the South to convince Simon Convey the Irish Foreign Minister, to place more pressure on the secretary of state Brandon Lewis to halt the passage of the act which Eugene has dubbed “The most sinister motion (he) has ever seen. "We are meeting the TDs from the South to request that they implore the Irish Foreign minister Simon Coveney to speak to Brandon Lewis regarding legacy issues and most importantly the unjust Statute of limitations that the British government is going to introduce in October.

"If this Statute goes through it will deprive so many people in Northern Ireland from both the Nationalist and Unionist Community who have suffered as a result of the atrocities committed during the troubles of the justice they deserve, which is completely unacceptable.

"We will brief the political representatives from the Republic on what our plans will be whenever we travel over to Westminster on the 6th of September to publicly protest the statute and explain to them why we believe it to be unjust. Our aim is to help the TD's to understand why a Statute of Limitations on crimes committed during the troubles should not be passed into legislation, with the hope that they will convey this sentiment to the Irish Foreign minister who will in turn add to the growing amount of international pressure that is being placed on the British Secretary of State Brandon Lewis as well as Boris Johnson and the Tory Party so they will retract the statute which as I have said before is the most sinister motion that I have ever seen.

Mark Daly, Brendan Howling, Victor Boyhan, Emihear Currie, James Lawless and Patrick Costello are amongst the group of Irish political representatives scheduled to be taking part in the meeting with Jim Shannon, Ryan Murphy, Dolores Kelly and Paula Bradshaw composing the quorum of politicians from Northern Ireland who will also be in attendance.

This meeting in question will preceded a planned protest at Westminster scheduled to take place on the 6th of September in which Eugene along with six other victims campaigners Julie Hamilton, Raymond McCord, Michael Gallagher, John Taggert, Billy McManus and Cathy McIlvenna , will hand in a signed letter of protest to both Brandon Lewis and Boris Johnson before publicly protesting at Westminster with a banner the group has created championing their deceased loved ones. This will then be followed by a meeting with a large conclave of British MPs to discuss the motion in which Raymond McCord, whose son was murdered by loyalist paramilitaries will present irrefutable evidence to prove that there was state collusion involved in his sons murder.

Mr McCord states that if the statute is passed into law, then it will mean that “that the British government will have effectively let the terrorists win, while also drawing attention to the fact that the introduction of a statute of limitations on crimes committed during the troubles is an issue that affects those living in both the North and South of Ireland.

“The reason why we have invited these politicians up from Dublin to attend this meeting is very simple. The more political figures across the whole island of Ireland who speak out against this motion the better because it will mean more international pressure will be put on Brandon Lewis, Boris Johnson and the British government to reconsider what it is they are doing.

“Furthermore you would be mistaken to believe that the introduction of a statute of limitations on crimes during the troubles is an issue that only exclusively has relevance to Northern Ireland, when it is not.

“This is an all-Ireland Issue because there were people who also lost loved ones as the result of terrorism in the Republic. Therefore, political representatives from the Republic should also be involved in championing the rights of those who injured and killed as a result of the troubles and to stop the introduction of a statute of limitations on the atrocities committed during this period.