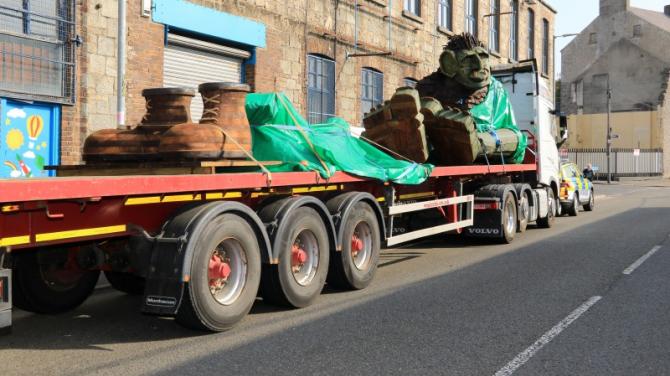 DUNGLOE, County Donegal is on the way to become the must-see destination for Irish families with the opening of a magical children’s story walk this autumn.

Trí na Draíochta, (The Land of Magic) is a new children’s art and story trail at the Riverwalk in Dungloe, Co Donegal, that successfully combines professional art with imaginative child friendly concepts to create a truly originally and creative experience.

The story walk features a series of original and innovative artworks that were created to bewitch and enchant children as they enter the walkway from going through the giant story book, visiting the homes of the faries and trolls to crossing the magic bridge between worlds.

The story is centred around a Norwegian troll who travelled to Ireland in search of a mystical island of the west of Ireland, which is only visible for one day every seven years. Unfortunately, on the day he arrived the weather was not the best and he got lost and ended up in Dungloe where he befriended the local fairies and made Dungloe his home.

The story walk is a highly imaginative creative experience for the young and young at heart and will no doubt add to the existing magical charm of Dungloe.

This innovative project was pioneered by the Tidy Towns Committee who worked continuedly over the last few years to drive the project forward, with the aim of creating an original visitor attraction to support the local tourism industry.

The committee enlisted the support from Sticky Fingers Arts, the award-winning children’s arts program behind Narnia, Co Down, Giants lair at Slieve Gullion in south Armagh and Ireland’s first indoor story centre, the Imaginarium, to create a new concept and create something special for Dungloe.

Sticky Fingers Arts are a children’s arts and creative play organisation who specialise in creating magical childhood experiences and yet again they have lived up to their reputation as the leading experts in this field.

“Trí na Draíochta represents a new dimension in cross border collaborations, this project captures the hearts and imaginations of everyone who encounters the troll, his friends and his quest to find a new home.

No doubt this is just the beginning of what will grow over time, with many new chapters, new characters and new stories developing along the way as well as a new way of different sectors working together.

A must-see attraction, to connect and rediscover the innocence, wonder and magic of early childhood where everything and anything is possible.”

Over the past year, we have been inundated by Town and County Councils across Ireland who recognise the need for creating quality experiences outdoors. More than ever parks, town centres and walking trails have become key development destinations as we try to create original ways of encouraging people to stay outdoors and still engage in high quality professional events and experiences for the whole family. Trí na Draíochta is an excellent example of using spaces in a creative and sustainable way.”

“Trí na Draíochta is a testament that a local community and local people can make positive change. The whole process from start to finish from working with the funders, Donegal Council, and community organisations in Dungloe and Donegal was such a refreshing and positive experience.

“We are delighted that Trí na Draíochta is such as success already ranked as the top family attraction on the island of Ireland.” Grainne Powell- Sticky Fingers C.E.O.

“This was a project the whole community and town bought into, it brought people together and provided a positive focus during the past year. We can’t wait to welcome Stor the giant troll to his new forever home as no doubt he is well on his way to becoming a national treasure attracting visitors from everywhere to see our famous troll.

We can’t thank Grainne and the team at Sticky Fingers Arts enough as they were so full of imaginative ideas and created so many brilliant concepts that involved the whole community. We will miss seeing the artists working away on the walk, although there are already plans under way to bring them back for more projects across Donegal. Marie Therese Gallagher – Donegal County Council.

The story walk features several high-quality professional art works created by Irish artists all carefully developed to be fully interactive, and to develop and grow over the years yet designed to compliment the existing natural environment.

Trí na Draíochta will officially open at the end of September but over the past few weeks, many visitors have enjoyed watching the story walk come to life with new art works appearing among the grassland as if by magic.

The main feature, an impressive giant troll is the final feature to be placed and is already reportedly enjoying his new home.

Local Councillor’s and children waved goodbye to Stor, the troll on Tuesday morning as he left Newry, but rest assured there are still plenty of magical creatures lurking inside the Imaginarium Arts and Story centre on Edward Street, just waiting to find their forever homes.