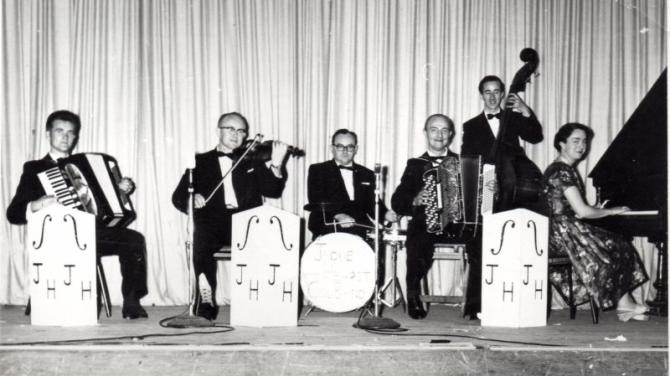 MIX nostalgia, history and tradition with a good dollop of music and you can evoke the most misty eyed and heart-warming sensations known to humankind.

They came to pay their respects on the news that Jackie’s incredible musical achievements will be celebrated at a unique event on Friday 17th September in the Railway Bar, Monaghan Street.

Jackie (John to his family) achieved international recognition with the Jackie Hearst Céilí Band and was revered by musicians at home and abroad. The tribute is being organised by Gaeláras Mhic Ardghail, as part of Oíche Chultúir/Culture Night, 2021.

Arguably the best known céilí band in Ireland and Britain during the late 1950s and early 1960s, Jackie Hearst’s International Céilí Band achieved the ultimate accolade by being chosen to perform the closing ceremony at Fleadh Cheoil na hÉireann held in Gorey in 1962. They were occasionally billed as Jackie Hearst and his All Star Céilí Band – “The Boys from the County Armagh”. At a time when radio was the premier source of entertainment in Ireland, they regularly featured on the Saturday night Walton Music programme as broadcast on Raidió Éireann. They played at venues and functions all across Ireland and drew in massive crowds in London and across England.

Jimmy Burns was a founder member of the band, as was his brother Gerry who was also the band’s Manager. Their names are synonymous with the performance of traditional music over many decades and they brought fiddle, fine voice and effervescent fun to the band’s changing line-up during its illustrious history. Gerry doubled up as the band’s driver and the Burns brothers were heavily involved in the band’s many recordings on the Glenside label and in their live radio performances. Jimmy first heard Jackie Hearst playing in venues in Omeath before the céilí band era really took off and is the first to acknowledge Jackie Hearst as a musical genius. Some of his reminiscences of the Burns family connection with the band will be shared on Oíche Chultúir.

Having started his playing career with various local dance bands, Andy Tohill joined the Jackie Hearst International Céilí Band in 1958 on double bass and was also joined that year by Warrenpoint pianist, Aveen Kinney, whom he later married.

They toured extensively with the band for the next four years, across both Ireland and England performing to capacity crowds in many high-profile venues, such as the Elephant and Castle and the iconic Galtymore in London.

The band’s uniqueness was in no small part derived from the incredible talent of Jackie Hearst, the hugely accomplished accordion player. Andy and Aveen left the band in 1962 as they entered a new period in their lives and continued their musical journeys through their respective careers, Aveen as music teacher in St. Mark’s HS, Warrenpoint and Andy as an instrumental tutor with the SELB Music Service.

Celebrated as they were during the céilí band era, it is perhaps true that amongst a younger generation of Irish traditional musicians and enthusiasts in the town, Jackie and his legendary band are

hardly known. That deficit will be put right on the night!

Gaelárs Mhic Ardghail is organising the ‘Ómos do Jackie’ event as part of the nationwide Oíche Chultúir/Culture Night. It has been a long-held objective of Gaeláras to honour Jackie and to commemorate his impact locally and nationally. We will be unveiling a plaque (courtesy of Michael McCaul Signs) to mark Jackie’s first residence in the town on Monaghan St., before heading into the Railway Bar where we will celebrate Jackie in story and in music.

The unveiling of the plaque is at 8.30 pm at Number 69 Monaghan Street, followed by the tribute at 9.00 pm in Beár an Iarnróid, a couple of doors away, áit ina mbeidh Ciarán Mac Domhnaill agus foireann s’aige ag tabhairt aire dúinn. Space is limited, so come early to avoid disappointment.