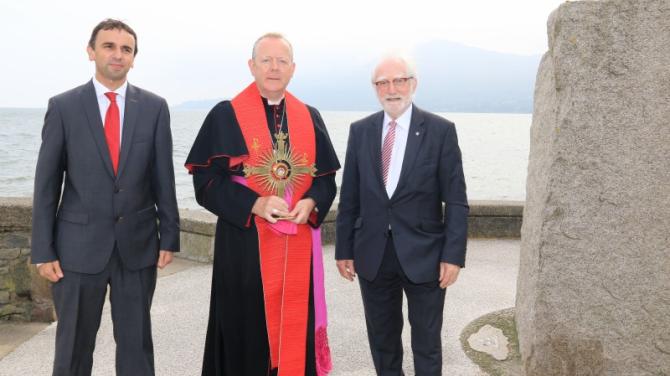 They gathered on the Sunday to remember the man who on another Sunday was injected to death in a Nazi extermination camp in Poland. In the act of that killing the Poles were given their hero saint, the priest, Maximilian Kolbe .

Father Kolbe had taken the death-cell place of a young married man, a family man.

The commemorative event was organised by the Irish Polish community and their friends, with local man Jerome Mullan, the Honorary Polish Consul in Northern Ireland, playing a key role.

The Polish people are among the most valued of our European neighbours and, in so many ways, have made Ireland their Polish home away from home.

Mass was celebrated in Saint Peter's Warrenpoint by the Archbishop of Armagh, Dr Eamon Martian. A relic of the Saint was brought to Ireland and was on display for the Warrenpoint gathering.

The His Excellency Pawal Majewski Consul General in Belfast for the Polish Community in Northern Ireland was also present and spoke of the courage, the humanity and commitment of Maximilian Kolbe who laid down his life of another.

The commemoration began with Mass in St. Peter’s Church in Warrenpoint,

The archbishop of Armagh, presided at the Mass, with Fr. Maximilian McKeown from the Conventual Franciscan order in Dublin concelebrating with other priests from the parish of Clonallon.

“COVID is a reminder to me that, with the help of God’s grace, all of us can proclaim the Good News, in a world which is sometimes not very receptive to God’s Word nowadays,” the archbishop said.

“Maximilian Kolbe teaches each one of us to remember that the Word of God is within us, and that each of us has a calling, in our own baptism, to be witnesses to the faith.”

“He also reminds us that even if things are difficult, if we hold on to the love of God, then we can get through. And I think nowadays that’s a really important message for all Catholics, and indeed for all Christians.”

After the Mass, the 59-year-old archbishop unveiled a plaque dedicated to the saint in a nearby peace garden.

A spontaneous procession then took place, with Martin carrying Kolbe’s relics through the town, blessing homes, streets, residents, and tourists.

Rajmund Kolbe was born in Zdu?ska Wola, central Poland, in 1894. As a child, he saw an apparition of the Virgin Mary holding two crowns. She offered him the crowns -- one of which was white, symbolizing purity, and the other red, indicating martyrdom -- and he accepted them.

Kolbe joined the Conventual Franciscans in 1910, taking the name Maximilian. While studying in Rome, he helped to found the Militia Immaculatae (Knights of the Immaculata), dedicated to promoting total consecration to Mary.

After returning to Poland following his priestly ordination, Kolbe founded the monthly devotional journal Rycerz Niepokalanej (Knight of the Immaculata). He also established a monastery at Niepokalanów, 25 miles west of the capital, Warsaw, turning it into a major Catholic publishing center.

In the early 1930s, he founded monasteries in Japan and India. He was appointed guardian of Niepokalanów monastery in 1936, founding the station Radio Niepokalanów two years later.Following the Nazi German occupation of Poland, Kolbe was sent to Auschwitz concentration camp. At a roll call on July 29, 1941, guards selected 10 men to be starved to death as punishment after a prisoner escaped from the camp. When one of those chosen, Franciszek Gajowniczek, cried out in despair for his wife and children, Kolbe offered to take his place.The 10 men were held in a bunker where they were deprived of food and water. According to witnesses, Kolbe led the condemned prisoners in prayer and singing hymns. After two weeks, he was the only man still alive. Kolbe was killed by an injection of phenol on Aug. 14, 1941.He was beatified on Oct. 17, 1971, and canonized on Oct. 10, 1982, being recognized as a martyr of charity. Gajowniczek attended both ceremonies.

Preaching at the canonization ceremony, Pope John Paul II said: “In that death, terrible from the human point of view, there was the whole definitive greatness of the human act and of the human choice. He spontaneously offered himself up to death out of love.”

“And in this human death of his, there was the clear witness borne to Christ: the witness borne in Christ to the dignity of man, to the sanctity of his life, and to the saving power of death in which the power of love is made manifest.”

“Precisely for this reason, the death of Maximilian Kolbe became a sign of victory. This was a victory won over all systematic contempt and hate for man and for what is divine in man -- a victory like that won by our Lord Jesus Christ on Calvary.”The commemoration in Warrenpoint was organized jointly by the Consulate General of the Republic of Poland in Belfast, the Polish Honorary Consulate, and the Newry and Mourne Polish Community Group.

Pawe? Majewski, Consul General of the Republic of Poland in Belfast, said: “It is important to hold events like this one in Northern Ireland as they allow us to share the knowledge of outstanding Polish people, as well as about recent Polish history.”“In fact, lessons from the past can provide insights into the present and even the future. We should never forget the sacrifice of the heroic deeds of those who lost their lives in World War II so that today we can live in peace.”

The event in Warrenpoint also saw the premiere of “Two Chapels,” a 20-minute documentary about Kolbe’s life directed by Krzysztof Kunert, a journalist for EWTN Poland.Aidan Gallagher, the CEO of EWTN Ireland, which also participated in the commemoration, noted that Kolbe was a bridge between the Irish and Polish people.“The Polish community in Ireland is a very strong community, and it’s very warmly regarded by the Irish people. There are between 100,000 to 150,000 Polish nationals living in our country. And the affinity of the Irish people with the Polish has always been very strong,” he said.

“Historically, that’s also been the case, because St. Maximilian Kolbe is regarded in Ireland as a very popular saint -- in fact, a super-saint. His strong ethic, his strong pro-life values, and his ability to stick to his principles of the faith, withstanding all types of torture, have been so popular internationally.”He added: “It’s also good to recognize at this time that Kolbe is also a powerful advocate for us in the pro-life ministry. In this past number of years, Ireland has had some serious setbacks in pro-life issues, with the abortion referendum. But perhaps few people realize that Kolbe is the patron saint of the pro-life ministry, having sacrificed himself for the value of another human being.”