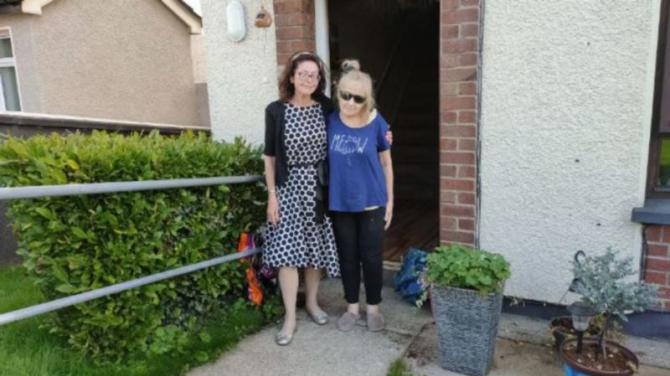 BARCROFT Street resident Joanne Rafferty has stated that she has been left feeling “completely down” following a vicious and entirely unprovoked attack that took place right outside the front doorstep of her Newry home.

Joanne who is 59 and suffers from a myriad of health ailments including osteoporosis and partial blindness, found herself the victim of a despicable assault carried out by three young youths in which she was subjected to a hail of stones, one of which left an extremely deep gash in the side of her right cheek. She was then punched and slapped in the back and neck multiple times, with the perpetrators in question turning over two flowerpots in her garden before they made good their escape.

Joanne has stated that the whole ordeal has left her in a state of utter disbelief, claiming that she doesn’t understand how any child, let alone the group of three that accosted her could be capable of such a heinous act.

“I just cannot understand how any child, let alone three, could be capable of committing such a vicious act like this against an ailing 59-year-old woman such as myself.

Joanne states that the assault began whenever one of the youths pulled open the front window of her sitting room and attempted to use it as a means to gain entry into her house.

"I had the window in my sitting room which looks out onto my front garden open and the next thing that I knew the window was pulled back to its maximum width and I saw three youths standing outside in my front garden. They were trying to get into my house through the window. I recognised one of the youths immediately but I was unfamiliar with the other two."

"I thought that if I went outside to confront them, they would run away, but this isn't what happened. I went outside to the front of my house and I told them that they shouldn't be behaving the way they were. One of them then overturned two of my flower pots. Another of the youths then proceeded to start hitting the back of my neck and my lower back while another started throwing stones at me.

"After this I told them that I would be calling the police and I went back into the house to get my mobile phone to demonstrate that my threat to call the police was genuine. When I came back out, they then attempted to grab my mobile phone. All three of them then proceeded to grab a large handful of stones and started throwing them at me and my house.

The harrowing assault that Joanne endured at the hands of these three individuals was only further exacerbated by the fact that she suffers from several underlying health issues which renders her especially vulnerable to injury.

“I suffer from a multitude of ailments. I have severe arthritis of the neck and I am completely blind in my left eye. Because of the osteoporosis my body is completely awash with pain. If I go to bed at night, I struggle to get back up again because of the arthritis in my neck makes me feel like I am going to choke, so I rarely ever sleep in bed at night. I also suffered a heart attack only eight weeks ago and had to be put on life support. I also have passed out on the floor because of low blood pressure. My poor health combined with my age probably made the youths who did this to me think that I was a soft and easy target.

“When they started throwing stones at me, I naturally raised my hands to defend myself because I was afraid that if one of the stones hit my left eye, I could be left totally blind. One of the larger stones hit me on the side of my face and left me with the deep gash on my right cheek. Since I suffer from osteoporosis all through my body as well as severe arthritis of the neck, I was afraid that if they pushed me down It would result in some of my bones being broken so I was holding on to the railing in my garden as hard as I could. I was in total shock and I told them that they wouldn't get away with this, the whole incident was totally horrifying. After the incident I came right back into my house and posted an account of what happened on social media.

Although this incomprehensibly evil act that befell Joanne has left her physically scared, she claims that her resolve to see those who committed this unspeakable act of malice be brought to justice has not been swayed in the slightest, stating that she believes those responsible should be “locked up” no matter what their age may be.

“I am not going to let the people who did this get away with this and I am not going to let this matter go. The police told me that the individuals who did this are currently out on bail and since they are still only juveniles, I don't know how it is they are going to prosecute and charge them. “Personally, I think the youths who did this should be locked up no matter what age they happen to be. My message to the police and the courts is that regardless if the people who did this are underage, they shouldn't be allowed to get away with only a slap on the wrist. I mean the bottom line is that I, a 59-year-old woman, was attacked and assaulted outside my own home, just a couple of steps from my own front door.

“This incident has left me feeling completely down and concerned for both my own safety and the safety of the whole community here on Barcroft street.”