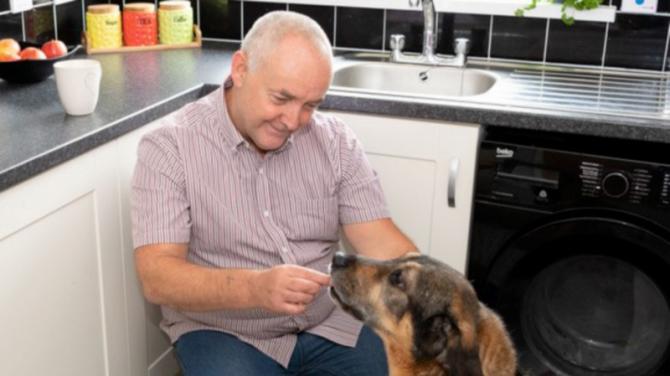 AS part of its ‘Good Neighbours make Great Neighbourhoods’ campaign, the Housing Executive thanked John McCabe for working tirelessly over the last year to make life better for residents of Drumgullion Avenue.

During the summer, Housing Executive staff and members of its Housing Community Network nominated tenants who have made a difference in communities all over Northern Ireland. After receiving dozens of nominations, the housing body chose John as the ‘Good Neighbour’ for Newry.

John has lived in Drumgullion Avenue, for the last 17 years and recently established a community group on the estate. Throughout the coronavirus pandemic he has been checking in on his neighbours, keeping everyone’s spirits up and working with public bodies to transform unloved pieces of land.

After finding out that he had been selected to represent the city, John McCabe said,

“It makes me feel humble that the Housing Executive has recognised the hard work that goes into harnessing and developing the phenomenal community spirit on the estate. This award is for everyone on the estate who has taken time to help their neighbours in whatever way they can – from gardening, delivering shopping, to being there during their time of need.

“Being a good neighbour is so important, it’s about understanding how your actions impact other people and doing small things that make everyone’s life easier. I would encourage everyone to get involved in their community and I hope this can act as some form of inspiration.”

“Our estates are full of phenomenal people like John, who make living in their community so special. This is why, as part of our 50th birthday celebrations, we are recognising them through this campaign.

“Alongside his fiancé Aislinn, John has brought people on the estate together to plant trees, create new flower beds and set up a community group. I’m delighted that I’ve been given the opportunity to thank him for going out of his way to help his neighbours and enhance Drumgullion throughout the coronavirus pandemic.”