Dennis ready for Marathon at 73 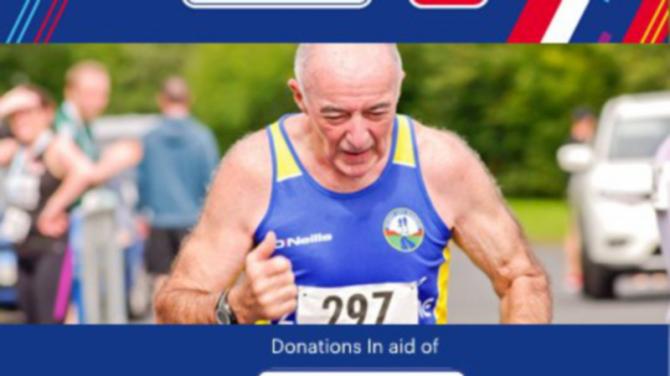 73-year-old Dennis Heaney, who is due to run the London virtual Marathon this October through the streets of Newry, has already raised £1,000 in aid of the Southern Area Hospice, which in his own words he claims “is dear to his heart”

“My wife Susan McCann is a patron of the hospice and we are planning to hold a small concert in Fiveways Car Park once I have finished the Marathon on Sunday the 3rd of October .

“ So, I am playing my part with the Marathon and my wife Susan will play hers in hosting the concert. We have also had a number of relatives on both sides of our family who have received care in the Hospice over the past number of years so this is the least I can do to try and demonstrate our gratitude for what it is they have done for us time and again.

“The Southern Area Hospice is dear to my heart. The hospice provides a vital service to the community throughout Newry, Mourne and Down and since they are not fully funded by the government, they have to pool funds from other sources to sustain themselves. That is why I am planning to run the London city virtual Marathon this October to raise funds for the facility here in Newry.

“We have already raised up to £1000.00 in funding which has been our main goal up until this point. Overall, I do not know how much we could potentially raise though. We may even be able to raise £2000.00 in total, who knows, I just know it is going to a good cause.”

Dennis says he never had any kind of enthusiasm for sport throughout his younger years, with music being his primary means of escapism in life.

His passion for running began with the first ever Newry City Marathon that took place in 2008.

“In my younger years I wasn't involved in sport, music was the main passion that sustained me throughout life. Both my wife and I have played music all throughout our lives. However, when I turned 60 it was 2008 and this was the first year the Newry city marathon was held. Everyone was talking about it. My friends started to tell me that I should take part in it, not realising what it was I was potentially getting myself in for. I signed up and the next thing I knew I found myself running a full half-marathon of 13.5 miles.

“I did really enjoy this experience and it turned out to be extremely beneficial for my health because I suffer from arthritis and this did help alleviate some of my symptoms surprisingly enough.

“From the Newry city marathon, I kept on running for recreation and have since completed the Dublin city Marathon twice as well as the Chicago city Marathon in the United States , although I think I have left it a bit late to enter the Olympics. Dennis cites the fact that after having taken up running for recreation it has gone miles to improve both his physical and mental health, and that the activity may be especially beneficial to older people who may be suffer from ailments that come part and parcel with ageing

“Running turned out to be extremely beneficial for my health because I suffer from arthritis and this did help alleviate some of my symptoms surprisingly enough. Although because I began running at a comparatively late age, I did experience some challenges that were further compounded by the fact that I never did take part in sport throughout my younger life. I found it very hard at the beginning to maintain elasticity in my muscles. I also found that the most difficult part of any exercise later in life is getting started in the morning, once you take a step out the door you do truly realise how cold it is, but don't worry you will get used to it, once you get started that is the hardest part over.

“Having said that running is a great past time and can have great benefits for your health. h It can also help to improve the ailments that you may suffer from later in life such as arthritis. I think everyone should get out there and do some form of exercise later in age because it is very beneficial for your wellbeing. As an added bonus both Newry city and the surrounding terrain over some Brillant terrain to run through as well beautiful scenery to observe whilst you are doing it.

“The Marathon will start after midnight on the 3rd of October. I will run 26.2 miles through the streets of Newry and I hope that more people will join me in the final golden mile from the Courthouse to Fiveways. I would welcome anyone who wants to come along and join me to raise money for the Southern Area Hospice.”