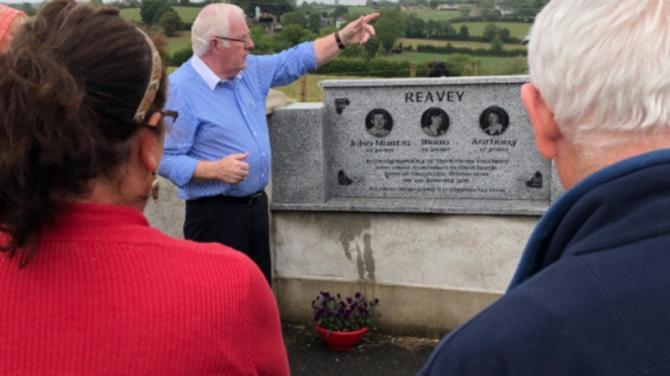 VICTIM’S campaigner Eugene Reavey has stated that he has been imparted with a renewed sense of hope in learning that the members of the Glennane Gang that murdered his three brothers John, Brian and Anthony 45 years ago may still be brought to justice thanks to a file that has been sent to the Public Prosecution service by the Police Ombudsman.

The file names a former RUC officer who was supposedly active in the Glennane Gang, which is thought to be linked to over 120 troubles related killings, as being potentially guilty for a number of offences including the murder of the three Reavey brothers in the village of Whitecross on the 4th of January 1976.

Mr Reavey , who since the death of his brothers has become a dedicated victims campaigner recalls the moment in which he was told by the Police Ombudsman that they were going to pass the file onto the PPS.

“The Police ombudsman sat me down in my home and told me that he had something very important to tell me. I have been in correspondence with the Police Ombudsman for years and I was never asked to sit down like this.

“After 45 years of campaigning for justice for John, Brian and Anthony, those responsible for their deaths may finally be brought to justice. Words cannot express how I feel regarding this prospect because we as a family had thought that the chance to get justice for our three lost brothers had completely passed us by after all these years of tirelessly campaigning for those who robbed us of our three beloved family members all those years ago to be brought to justice.”

When Mr Reavey asked the Police Ombudsman what the chances were of this letter being sent to the PPS resulting in a successful trial of those suspected of murdering his three brothers, the ombudsman responded that he “would not have sent this file on if he did not believe that it would stand a very good chance of seeing Brian, Anthony and John’s killers be brought to justice.

“I asked the Police Ombudsman how strong he thinks the case he has presented is and he responded that both he and his colleagues would not have forwarded the file onto the PPS if they did not believe that they had a very good chance of bringing the people who murdered my brothers to justice.

“He told me that he believes that the evidence brought against those suspected of murdering my brothers in the file is overwhelming. While Mr Reavey is extremely enthusiastic regarding the decision taken by the Police Ombudsman to forward this new evidence onto the PPS, in his own words, “this still may not result in those responsible for his brothers deaths being brought to justice” owing to the statute of limitations on troubles related crimes planned to be introduced by Boris Johnson and the Tory government at Westminster.

"Just because the Ombudsman has forwarded this information onto the PPS, it does not mean that the case against the former RUC officer named in the file will make it to trial. This is owing in no small part to the statute of limitations on troubles related killings that Boris Johnson is trying to push through the House of Commons.”

"We went to Westminster to protest the statue on Monday the 6th of September as well as going to 10 Downing street to hand in our letters of protest against the motion.

"We are also scheduled to go back to Westminster in October to meet the leaders of the main parties to further protest the statute. After this we will also attend a meeting with peers in the House of Lords which stands as the best chance that we as victims' campaigners have to derail the motion because a large number of peers are judges that will scrutinise the statute of limitations in every way that they see fit. If they deem it as not being compliant with Article 2 of the Human Rights Act, they will not pass it into legislation.”

It is Mr Reaveys belief that although the file that has been forwarded to the PPS by the Police Ombudsman may not necessarily result in a successful prosecution of those whom he believes murdered his brothers, if this action taken on behalf of the Ombudsman does result in those who murdered his brothers being publicly named, then “the Reavey family will consider it a victory.”

“Even If this move on behalf of the Police Ombudsman initiates legal proceedings that will result in those who murdered my brothers being eventually publicly named then we will consider it a victory, because those who killed my brothers should be recognised in public for what it is they have done.”

Although 45 years have elapsed since the murder of Brian, Anthony and John ‘ Mr Reavey says that their killing has resonated with him throughout all of his life.

“The fact of the matter is that since the events of the 4th of January 1976 I and my remaining siblings have been left without three brothers and this has resonated all throughout our lives. When I attend football matches where my younger relatives are playing, I always think there is something missing. This is because the events of that terrible day 45 years ago robbed us as a family of children , grandchildren, nieces and nephews, and the great nieces and nephews that John Martin, Brian and Anthony would have gone on to have been blessed with if they were not murdered.

"They should all be playing football now with the children, grandchildren, nieces, nephews and great nieces and great nephews that the Reavey family have been blessed with. I see this loss every day of my life. When I attend football matches where my younger relatives are playing, I always think there is something missing. I yearn for the endless enjoyment that I could have had running after the children and grandchildren that we had taken away from us as a family. This is to say nothing of all the other life events like christenings birthday parties and marriages that we had ruthlessly taken away from us.