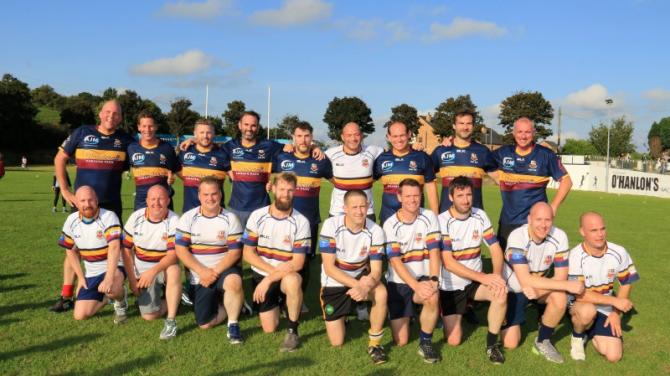 THE Poyntzpass community came together to celebrate the remarkable career of former Ulster, Ireland and British and Irish Lions captain Rory Best at the Redmond O’Hanlon’s grounds.

An unforgettable afternoon of nostalgia and entertainment included music from Poyntzpass Silver Band, Gaelic football and rugby games played by local children and then an exhibition match between Rory and the team of 1993 (which had been drawn from the two primary schools in the village) against a side skippered by his elder brother Simon.

Bill Ferris was master of ceremonies on a day that also included the singing of ‘Ireland’s Call’ by a choir made up from combined primary school pupils, the reading of ‘An Ode to Rory’ written by Maude Moorhead and a synopsis of Rory’s career read by Brian Canavan.

Like Rory, Brian had scored at Croke Park – he kicked two points when Armagh played Roscommon in the 1982 All-Ireland semi-final – and after he had looked back over Rory’s stellar career there was the presentation of a weather vane to the man that skippered Ireland to Six Nations glory, the Grand Slam, Triple Crown and wins over New Zealand, Australia and South Africa.

“Thank you to everyone for turning up and playing today,” said a delighted Rory when his turn came to address the hundreds in attendance.

“I think the P7 versions of ourselves were probably a little bit better than we were today but it was good fun! For me this is incredibly special, seeing all the people here means a lot to me and thanks to everyone for their hard work and effort in organising this.

“Poyntzpass is somewhere that is unique. It’s easy to stand here today and talk about all the high points in my career but I think that what sums up a community and how tight that community and how great that spirit is is when the tough times come and there were a few.

“There was a lot more than a few and it was the support that I got from here (that helped me through them). It didn’t need to be words, sometimes it was an arm around the shoulder or a ‘hello’ and a friendly face. Those were the moments when I realised first of all how lucky I am to be from here and also the community spirit and that’s what you do things for.