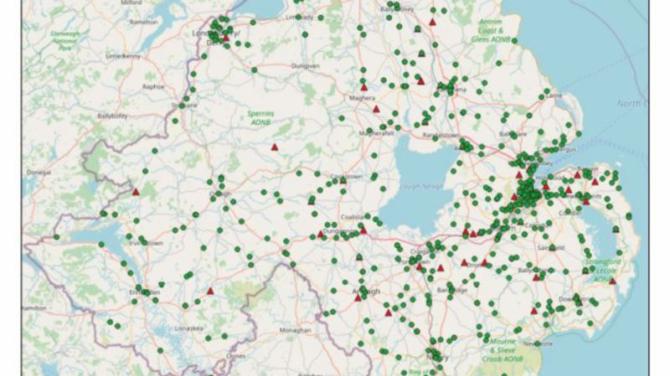 NEWRY, Mourne and Down District has one of the highest rates 49% (per 100,00 population) of people killed or seriously injured in NI as a result of a road traffic incident in 2020.

A new report on the NI Road Safety Strategy to 2020 shows that there there were 56 fatalities in road traffic collisions in Northern Irteland in 2020.

This represents a reduction of 55% from the 2004-2008 Strategy baseline figure (126), and no change from 2019. There has been a relative levelling off in the number of fatalities in the last three years.

There were 596 people seriously injured (SI) in road traffic collisions which is 23% less than the number recorded in 2019 and 46% less than the baseline figure of 1,111.

Seriously injured numbers have fallen considerably since the baseline and the annual percentage decrease between 2019 and 2020 (-23%) was the largest decrease in the series. The 2020 target of 611 or fewer SIs was achieved.

There were 55 children (aged 0 to 15) killed or seriously injured (KSIs) in road traffic collisions – sixteen fewer than in 2019. This represents a reduction of 57% from the baseline figure (128) and a decrease of 23% over the year. The 2020 target of 58 or fewer child KSIs was achieved.

There were 128 young people (aged 16 to 24) KSIs in road traffic collisions, which was 26% less than the number recorded in 2019 and 65% below the baseline of 366. This is the lowest recorded since the strategy began and below the target of 165.

Over the three year period 2018-2020, novice drivers (new drivers within two years of passing their ‘category B’ driving test) were involved in road traffic collisions that resulted in the death or serious injury of, on average, 98 people each year. This represents a 9% decrease from the 108 average number of KSIs recorded during the 2017-2019 period and is 54% below the 2008-2010 baseline average of 214 KSIs per annum.

In 2020, just under two-thirds (65%) of vehicles exceeded the speed limits on built-up roads (all road types up to 40mph) under free-running conditions (11pm-7am).

On non-built-up roads, the proportion of vehicles exceeding the speed limits, under free-running conditions, was greatest on dual carriageways (51%), followed by motorways (24%) and single carriageways above 40mph (23%).

The corresponding non-compliance rates during the hours of 7.00am-11.00pm, when most travelling occurs and congestion serves to dampen vehicle speeds are: 37% on built-up roads, 34% on dual carriageways, 21% on motorways and 10% on single carriageways above 40mph.

There were seven people killed in road traffic collisions where alcohol or drugs was attributed. This is five fewer than was recorded in 2019 and is the lowest number recorded in the series. The number in 2020 is 75% below the baseline level of 28.

The most common reason cited for feeling unsafe when walking by the road was that there was no footpath, with 37% of all Travel Survey respondents giving this answer. Approximately a quarter said that heavy traffic, traffic travelling above the speed limit and motorists driving without consideration made them feel unsafe (all with similar percentages of 28%, 27% and 26% respectively).

More than half of respondents (56%) felt unsafe when cycling due to heavy traffic, whilst 49% felt unsafe because of motorists driving without consideration of cyclists.