Business    "is a buzzing" at Buzzard Comics Newry. 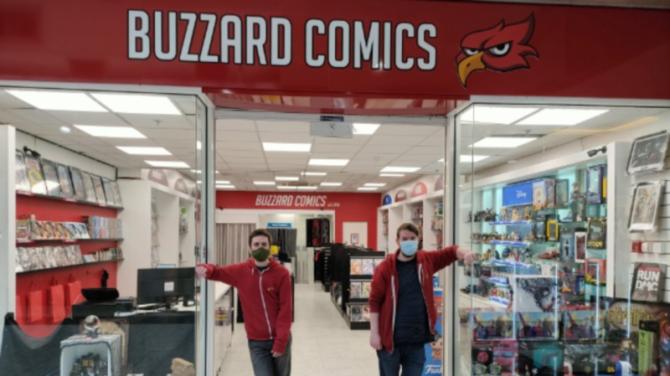 Of all the local businesses throughout Newry, Mourne and Down that have felt the demoralising impact of the economic damage wrought by the ongoing Covid 19 pandemic, It goes without saying that none have been harder hit than the small independent retail outlets that have a physical presence on Newry’s high street.

These small, independently operating businesses that form the backbone of the area's economy are the sole result of the enterprise and initiative of local entrepreneurs who have had the courage and intelligence to take the so called leap of faith into the great unknown of establishing and operating their own private business to try and turn their dreams into a tangible reality for the benefit of the people of Newry, Mourne and Down who will avail of the products and services that they will provide.

However,, if there is any one incident in recent history that has had the greatest potential to turn the dreams of these inspiring entrepreneurs into a waking nightmare it would be the onset of the Covid 19 pandemic, probably the single greatest economic challenge that the world has seen in a generation.

From the 26th of March until the 1st of June 2020 all non-essential retail outlets were forced to close their doors as a result of the stringent measures introduced by the government in order to ensure the number of lives lost as a result of the pandemic was kept to an absolute minimum.

While it is widely understood that this decision was taken for the greater good of the country and its inhabitants, it goes without saying that lockdown, and the wider economic disruption caused by the Covid 19 pandemic did have a disastrous impact on the level of footfall seen in high street retail stores that were not deemed as being essential. These effects were felt most sorely by the small local independent retail outlets that did not have the backing of large multi-national conglomerations behind them, having to rely solely on their own financial resources and measures introduced by the government such as the Small Business Support Grant and the £100.00 High Street Voucher scheme to survive in the most economically unsure times since the great recession seen at the beginning of the last decade.

While these measures played their part in helping some small businesses both within Newry, Mourne and Down and the country at large survive the onslaught of the pandemic, many sadly had to close their doors never to see custom again.

Buzzard Comics, the brainchild of local entrepreneur Patrick Treanor, is one business that thankfully has not fallen into this category, seeing business slowly but surely returning to its vibrant and colourful store located at Unit 14B of the Quays Shopping centre Newry.

Now when society finds itself in what hopefully could be considered the “epilogue stage” of the Coronavirus pandemic, Patrick has kindly facilitated an interview with the Newry Democrat to relate his experience of what it was like to establish a

small, privately owned business, whilst also having to see it through the darkest days of lockdown.

The start of Patricks journey to found his own business began where many like his have before, selling products online to try and generate revenue that would enable him to move his enterprise into a physical store that would allow for him to cater to the tastes of all the pop-culture aficionados throughout Newry, Mourne and Down selling, amongst other things, comic books, action figures as well trading card and board games.

“Six years ago, I rented a unit in the WIN Business Park with the view of running my own business. I had no clue what it was going to be really, I started out making business cards and leaflets for local businesses but then ended up selling posters on Ebay, mainly comic and movie- related. From there I figured no one else was selling comics locally so I should give it a try.”

“I had no money going into it and never had any loans or grants, so progress was always very slow. I don't resent that though, all the money I made went straight back in to the business and when your cash flow is limited you tend to make better decisions with that money and become very resourceful. I've seen many a business come and go over the past 6 years with seemingly significant investments from the beginning but I think they would have stood a better chance starting off small and building from there. You can't skip the lessons from the early years.”

After the onset of the pandemic in March of last year and the subsequent loss of income that was incurred due to the fact that Buzzard Comics could no longer host trading card game tournaments, which Patrick cites as being responsible for a significant portion of the firms income, he began to have in his own words “serious concerns” for the future of his business.

However, despite this, in a fashion befitting some of the great superheroes from the golden age of comic books such as Superman, Batman, and the Flash, Patrick was not deterred by the adversity and difficult circumstances he now found himself in. He still laboured to make his long term ambition for his business a reality, that being to relocate the store to the Quays shopping centre, which he believes “is a perfect match” for a business such as his which sells the kind of products relating to popular culture which people adore. This is owing to the fact that there is also a cinema in The Quays Shopping centre complex.

“Once the pandemic hit, I had serious concerns for the business. I felt like we were going to lose years of progress. Even when everything reopened last summer (when we were still in the old location) it wasn't the same. We host a lot of trading card gaming events like YuGiOh, Pokemon and Magic the Gathering. They are responsible for a significant amount of our income but in 2020 we made nothing from this due to social distancing rules. I felt that if we didn't move then we might miss the opportunity for good.”

“The goal was always to move to a Shopping Centre, it's where I believed that a shop like mine would thrive. So much of what we do is based on pop culture so with the Cinema being in The Quays it's a perfect match for us. The Quays have been phenomenal to us since we arrived and I have no regrets.”

However, this decision to relocate the store premises to the Quays was not taken lightly, with Patrick citing the fact that as a business owner he did see the damage that each subsequent lockdown was having on the high street economy in Newry, whilst simultaneously observing a change in peoples shopping habits with more people turning to online retail to purchase the goods that they could not procure instore.

“During the lockdowns I could see the damage already starting. People’s buying habits started to change, the shops were closed but people still wanted to buy the things that are important to them. They weren't going to wait for shops to re-open for that, they were going to buy it online.

Thankfully we've had an online presence through Ebay for years so we were able to salvage something from that but literally, every other small business was doing the same so competition was fierce. I love what we do but at the end of the day we sell non-essential items and this was before we made the move to the Quays so we were in a non-retail location at the time so there was little passing trade. People weren't willing to make a non-essential journey for an item they could buy online and no one can blame them for that.”

“I never feared closing down though, people's health and safety were more important. This is just business. If the move to The Quays hadn't of happened, I suspect I would have adapted in whatever way I needed to keep going.”

Patrick is glad of the fact that almost all retail outlets on Newry's high street have permanently reopened and are back in business with no sign of any other lockdowns on the horizon. Having said that Patrick fears that next year “is going to be far more difficult for businesses” and that “he hopes the Northern Ireland Executive is ready to support small businesses such as his own”, citing the fact that although he is grateful for the support measures already implemented by the Executive such as the £100 High street gift voucher scheme, he suspects that “larger businesses will see the greatest benefit from this one particular measure as opposed to smaller businesses such as his own.”

“I am not sure what the Northern Ireland Executive has done so far to support small independent businesses such as my own is enough to help us out, although having said that I am not sure what it is they could do either.”

“The £100.00 voucher scheme introduced by the Economies Minster Gordon Lyons is an interesting experiment, at least that's what it feels like - an experiment. If people choose to use it in my store, I'll be extremely humbled but I suspect bigger businesses will benefit from it more. Time will tell. I hope consumers and businesses alike benefit from it.”

“When starting your own business start small. It's not going to be perfect from the first day and there's nothing wrong with that. You don't need crazy amounts of money or degrees in business or whatever. If you have an idea, give it a go or you will always wonder, What if?”