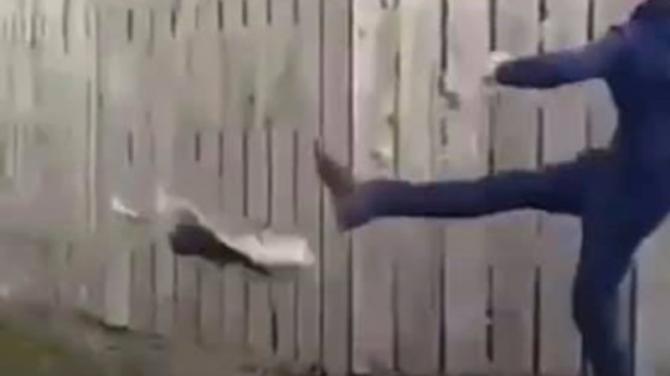 SLIEVE Gullion Councillor Declan Murphy has condemned a video that was recently circulated on social media which appears to show a cat being subjected to a severe physical assault by one lone male in the village of Forkhill.

The video, which was shared on, and has since been removed by Facebook, appears to show an as yet unidentified male subjecting the poor, defenseless animal to a kick so forceful that it propelled the feline several feet into the air before it eventually returned to the ground.

“I cannot understand the reasoning our rationale that motivated the people involved in this terrible act of animal cruelty to do what it is they did. While I have not seen the video I can only speculate that the people who did what it is they did to this poor defenceless animal in Forkhill did so because they thought it would be entertaining to share the footage on social media, which, I can say with absolute certainity, it definitely is not.”

Whilst condemning the incident Councillor Murphy would also encourage anyone with information relating to this appalling incident in question to come forward and share it with the PSNI who are already looking into the matter.

"What we have here is an incident of a poor, defenceless animal being assaulted for no reason what so ever which is absolutely unacceptable in this day and age. I strongly condemn anyone who is involved in any incident of committing cruel acts against animals and I would encourage anyone with information relating to this dreadful incident to come forward and share it with the PSNI. While there was only one person caught on camera assaulting the cat there was also obviously someone filming the incident on camera, so two people are responsible for being involved in this awful act of animal cruelty, and they need to be brought to justice.”

After being informed of the incident the USPCA announced publicly in a statement that as an organisation it is “absolutely appalled by the suffering inflicted on a defenceless animal in the South Armagh Village of Forkhill.”

“This video shows an horrific act of cruelty being perpetrated towards a cat in the Forkhill area. The incident has been reported to the police and we ask anyone with any information that may aid their investigation, to come forward immediately”.

Confirming that they are currently aware of this abhorrent incident of animal cruelty, the PSNI made a public appeal for anyone with information that can help them in their investigations to come forward.

“Police received a report shortly before 9.50am on Tuesday, October 12 of a video circulating on social media which appears to show a cat being mistreated within the vicinity of Park Urney in Forkhill.”

Enquiries are ongoing and anyone with information is asked to contact police on 101 quoting reference 454 of 12/10/21.”