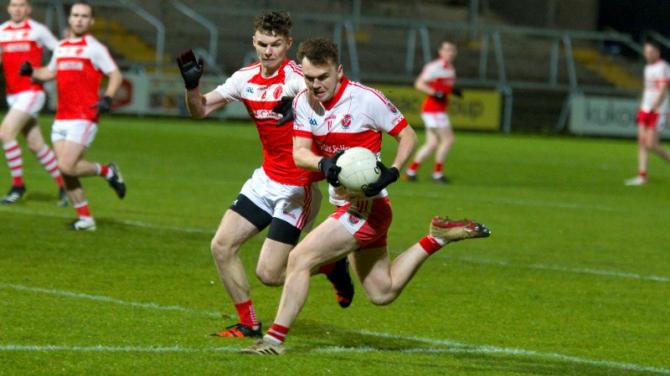 DESPITE losing a goal after a mere 60 seconds to Tullysaran, Carrickcruppen played some super stuff to reach the Armagh Intermediate Championship final.

At the Athletic Grounds on Saturday the Camlough boys deserved their four-point winning margin and will be busting a gut to win the final against Culloville - in a match that will take place in just under two week’s time.

Barry Flynn, who manages the side with Paul Cunningham, is an ambitious boss and has big plans for the future of the club.

Speaking after the match Barry spelt out those plans. “My job is to get this club back to Senior football. And now we’re just one game away from it. We’ll be playing a better standard of football next year, regardless of what happens in two week’s time. But make no mistake, we’ll be going to win the game.

“These boys are good enough to win at Intermediate level. All of them have played football in Division One, they have contested finals at Intermediate and U21s. Then they were playing teams in the top eight so we were the ninth best team - at worst.

Now we are playing teams that are ranked 17th at best in Intermediate football.

“However, we will go into the final against Culloville as huge underdogs. But we’ll be going to do the best we can. We will come up with a game plan and if we’re good enough on the day we’ll be moving into senior football … and into the Ulster Championships.”

Yet an Armagh final seemed far away as just over a minute into the match Tullysaran’s Eddie Mallon blasted past Blaine Hughes and into the back of the net.

Still the Camlough boys bounced back and before the first water break they were in front. Richard Keenan grabbed the opening Carrickcruppen score with a freekick on seven minutes with Tiarnan O’Hare firing over another four minutes later.

And the side were all square on 13 minutes, when the speedy Eoin Wood hit a fabulous point after a sizzling run.

Not for long though with Tullysaran then having a purple patch.

The sure-footed Gavin Conlon fired over three times in the next 15 minutes with Brian Kelly also on target. While in that spell only Eoin Woods could point at the other end.

At the break Carrickcruppen trailed by two points and it was three two minutes into the second half when Mark McKeever found the range.

Then Carrickcruppen were finding the going tough.

The Camlough boys were struggling at that stage … but on 33 minutes the Tullysaran keeper Sean Black misjudged a high ball and, as Stephen Loughran attempted to take advantage of the netminder’s error, he was unceremoniously dragged down.

And it was a goal when Tiernan Kelly coolly slammed into the bottom corner.

It was the break Carrickcruppen yearned.

From that moment on the Camlough lads knew they could win.

Kelly added another point to his team’s tally and although Eoghan Daly pointed to square matters at nine points apiece, Carrickcruppen were on a mission.

Stephen Loughran hit a super score from way out on the left on 41 minutes with Blaine Hughes unerringly pointing from a ’45 a minute later.

True Tullysaran answered with a James Madden score on 45 minutes.

But they would not score again until injury time.

It was time for the Camlough men to take the game by the scruff of the neck and they did so with points from Paul McNally and Richard Keenan. While the excellent skipper Stephen Loughran added to the Cruppney tally with a pair of beauties, one from a freekick ball and one from play.

The normal 60 minutes were up but the referee added on five minutes of injury time.

In those five minutes Gavin Conlon pointed twice to leave just a goal between the teams.

As the clock ticked towards the last whistle the question was: ‘Could Tullysaran escape from jail?’

The short answer was no and Richard Keenan ensured victory when hit a stunning 35-yard free from way out on the left that was destined for the target the moment it left his boot.

It was celebration time for Carrickcruppen.

And it’s a final the Camlough lads will look forward to with relish.

Barry Flynn had the last words when he confidently proclaimed:

“We know Culloville as we play them in challenge matches regularly. We know what they’re about … and of course they know us.

“But they will need to put in a hell of a performance to win!”