£20,000 raised for Newry woman to receive cancer treatment in Germany 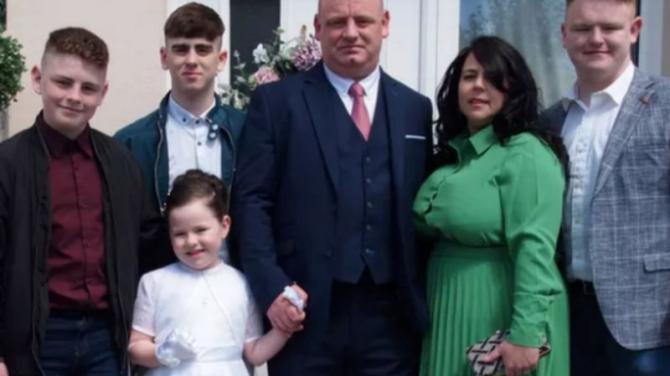 OVER £20,000 has a been donated by the Newry public so that a local woman who is suffering from an advanced form of Colorectal cancer can receive a pioneering new form of treatment in Germany that has the potential to save her life.

Mother of four Aine Maney was diagnosed with cancer just over two years ago and since then her family established a GoFundMe page so that people from the Newry, Mourne and Down community could donate money so that in her brother in law Damien’s own words “She could make the most of the time she had left and that she could give her children the memories she would otherwise would not have been able to.”

However owing to the overwhelmingly positive reception that the GoFundMe page entitled “Where hopes grow miracles blossom” received, with the page in question garnering initial donations in excess of £16’000, Aine and her family were instilled with a renewed sense of hope.

The family decided to try and use the platform to generate the revenue necessary for Aine to receive a pioneering new form of cancer treatment in Germany known as “ trans-arterial chemoembolization.

Aines brother-in-law Damien related the moment when his sister in laws outlook on her diagnosis changed because of the considerable degree of support she received on the crowdfunding platform, stating that “the fact that Aine wanted to fight was a point that she made clear to every one of us”.

“The motivation behind the establishment of the GoFundMe page was to raise money so Aine would have the financial means to create memories with her children and her family.

" However, After the great reception that the GoFundMe page received Aines outlook on the matter did change and instead of accepting her fate, she decided she wanted to fight, this is a point that she made clear to every on one of us. My wife then thought of the idea of using the GoFundMe page to try and generate the revenue needed to seek out other forms of treatment for Aines cancer."

“The name of the treatment that Aine could potentially receive in Germany is called trans-arterial chemoembolization. Essentially this is a form of non-evasive treatment that does not involve any kind of surgery. What it involves is the insertion of a number of obstructing beads through the art

ery that leads to the tumour and block the point at which the tumour receives oxygen and blood and starve the tumour of what it needs to survive. This will be followed by a course of chemotherapy.

Damien also expressed his sincerest thanks to the community of Newry, Mourne and Down for both the financial and indeed emotional support shown for Aine, claiming that as her brother-in-law it is “humbling to see the degree of support that we have had from the community to try and get Aine the support that she needed.”

“For anyone, knowing that you have been given a terminal diagnosis is a very difficult thing to accept and although this wasn’t something that Aine was going to accept the level of support that we have received from the crowdfunding page has given all of us and especially Aine to push on, continue the fight and try to receive this treatment.”