The Met Gala, Strictly and The Brit Awards, what will Newry girl do next? 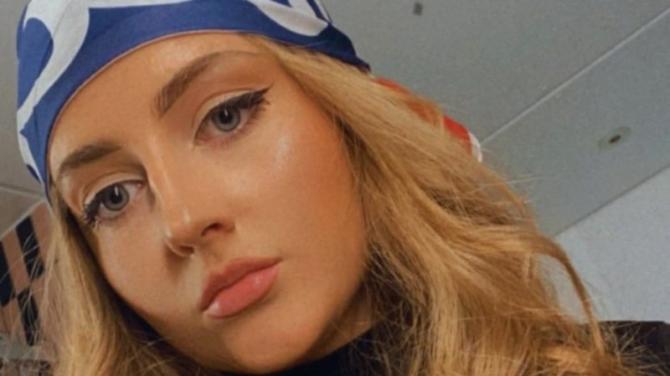 Firstly, could you tell us how you came about getting into fashion and where the inspiration first came about?

I think I always knew I wanted to do fashion design of some sort from when I was about six or seven its just always what I wanted to do, I always had sketch books and loved drawing. I got in trouble in school for as the most of the time I was too busy drawing all over my books.

I noticed as well when I would be watching movies I'd be designing the costumes for the characters in my mind and never actually focusing on the film. It was always a passion and what I wanted to do. It was costume design when I was younger but slowly it developed into fashion as I got older. There was no turning point it was always what I wanted to do.

Did you attend University? If so, what was your experience like, did it have a positive influence on your work?

I completed my three-year undergraduate at The University of the Arts London, I had a break in the middle for industry experience which was when I moved to Amsterdam at nineteen to work for Viktor & Rolf which allowed me to attend major fashion events Paris Fashion Week . I think university is really important for learning the basics of craftsmanship and the industry but, I found for me it was very limiting. I don't like being told what to do, tutors telling me what was right and what was wrong. Fashion is such a creative course and so my response was always well that’s your opinion. You end up in a bit of a bubble in university and all you see are the people around who are competing with you. You forget there are millions of other people at the exact same level as you in the world. I do think university is essential for learning the skills and basics of the industry. If you walked into that industry not knowing the basics you would be swallowed up. There are positive and negative impacts from university for me, it’s so stressful and includes massive amounts of time and work but, then all of that is preparing you for the industry.

It’s been a turmoil year for a lot of us, especially those within the creative industry. How have you been able to stay motivated and creative?

From moving to London at eighteen I hadn't gotten to spend more than two weeks at home a year since. Coming home to Newry gave me a chance to recentre myself and remember why I am doing what I do. As soon as I got back to London it was back to the 6am cars, studios, and working in hotels for days at a time. Though I am grateful for home as mentally and physically I think I needed the break. I also joined the NI Scrubs group, which is an amazing organisation where you create your own scrubs for key workers. My scrubs went to Daisy Hill and the Southern Area Hospice in Newry, which both really mean a lot to me. I felt because I was home for a while during the pandemic and had my sewing machine and all my equipment there was no reason why I should not be doing something to put my skills to use.

What are you working on at the moment and have you any milestone moments you are most proud of in your career so far?

Earlier this year I worked with a brand called Harris Reed in London where I was assisting in the creation of Ollie Alexander’s outfit for his performance with Elton John at the Brit Awards. Vogue did an article on the co-creation of the looks. I mean that was crazy. For anyone seeing their picture in Vogue is unbelievable. I was also involved in the making of Iman Bowie’s Met Gala red carpet look for New York, which for me was the most surreal moment in my career so far. I was so preoccupied with Strictly that it didn't quite register that part of my brain was on the Met Gala red carpet. Seeing the response to that was crazy and working for that brand really pulled me forward.I was balancing that with working on music videos with artists like Skepta and Potter Payper, rappers in the grime industry. This was so much fun because it was new and was a huge turning point for me in my career this year in terms of tv and film. I realised I loved the social element, as a job in fashion can be quite lonely. I was surprised to find it doesn't need to be just me and my sewing machine, so it felt really nice to me.

What do you think about work ethics and what kind of ethics you believe in following while working with fashion?

As a young designer, I think it is really important to have core ethics right at the centre of your work at all times no matter what role you are in, no matter what sector of the fashion industry Outside of my own work I boycott fast fashion personally and professionally. I don't buy anything at all from fast fashion brands, fast fashion and high street brands allow slave labour and cruel working conditions for their workers. This is 2021 and its ridiculous that this is happening and as consumers, we don't really have an excuse for us supporting unsustainable brands.

In terms of brands stealing young designer’s ideas, it's a touchy subject for me as that has happened to me in a job. I wasn't credited because the head designer didn’t feel they wanted to. It's really disheartening. You just have to kind of keep going and hope the right brands will see your work.

Do you have any advice for any young people who are thinking about a career in fashion design?

I would advise anyone wanting to start in the industry to move to a hub of fashion. A place where they’ll find inspiration and like-minded people. And don’t be deterred by the competition, it is of course very real, but it doesn’t need to be, and I’ve work in fashion with some of the nicest people I’ve ever met. It doesn’t have to be the cliche of The Devil Wears Prada or Ugly Betty. I moved straight to London at eighteen at the first given moment. I guess I never really gave Ireland a chance, but I think I just knew this is where I wanted to be. All of my friends here in London are incredibly talented and creative and that inspires me. A lot of my work is to do with people being brave enough to use fashion as an expression. In Ireland where the creative industry is not as huge, it is harder to find work in fashion. I do believe it was the right thing to do. London offered me more opportunities that I would not have had if I had stayed in Ireland.

Tell us more about Strictly, is it as fun as it looks?

Strictly is crazy, the most fun job I have ever done in my life it's just absolutely bizarre, like strictly has been so much fun because the creative license is endless and there are no boundaries so you can have complete fun with the job and the people. It's just the best team that I have ever worked with, everyone is there because they love their job, they love what they do. It's never the same thing every day is different, my heart will break when the seasons over, it's been really fun it's been such a pleasure to work on. I have watched the show my whole life with my mum and so just being on set and seeing it all live is crazy but it's so good.

What is next for you in the future? Do you have any goals you have set yourself for the future Siona?

After Strictly I have a few more tv things and hopefully next year I will launch my own brand. It is daunting but it’s something I've wanted to do since university, and I've always been working on it. Its hugely important in society now and it’s to do with gender fluid fashion, masculinity in women and femininity in men, just total disregard of gender clothing. In society, men do get a lot more abuse for what they wear than women. Women can be wearing a suit and it can be totally fine but if a man wears something that would be stereotypically feminine, they would be totally slaughtered. In London, I am surrounded by people from the LGBTQIA community and there are so many people around me that are limited, and fashion is part of their expression and so it is really something worth fighting for and I think it's time we push it more.