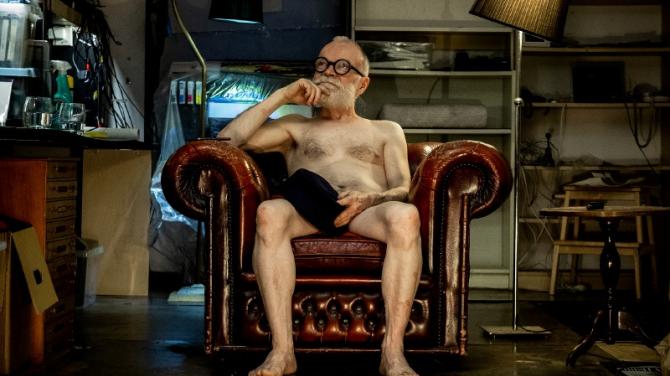 ‘TOMORROW is Saturday’ is an intimate, fascinating portrait of Irish collage artist Sean Hillen – a brilliant, complex, unruly mind, hemmed in behind a lifetime’s collection of hoarded junk, unfinished art and precious memories at his tiny Dublin terraced home.

Tomorrow is Saturday is a TV cut of the IFTA 2021 nominated feature documentary, which won the audience award in the IFI documentary festival 2020.

The programme will be screened on RTE One thius Thursday, November 4.

Diagnosed with Aspergers in his late 50s, Sean, the most heavily censored artist to come out of Ireland or Britain, has reached the point where his mental state and physical surroundings had brought his creativity to a halt.

“I get mixed messages from the world. I think I’ve made good pictures, and I’ve failed to make a living at it. My life doesn’t really mean anything if that work isn’t seen.

This is my little house, my studio, my little empire”.

Trapped in a tiny terraced house, full to the brim with junk, unfinished art and boxes of memories, Newry born Sean embarks on a journey to declutter and make sense of his life as he waits the arrival of his beloved Amy – an American woman with whom he communicates daily, but has yet to meet.

Here he lives, sleeping on an unusable sofa bed in the living room, with barely enough space to move; a shrine on the wall to Amy, the paramour he has so far only communicated with online.

Upstairs in his tiny home, is another cluttered area which Sean describes as his ‘proper’ studio:

“It kind of reminds me of where I’m failing, and it’s stopping me working, that's the most important thing, actually.”

As he awaits fellow artist Amy’s imminent arrival from Chicago, Sean recounts his life to date in vivid detail, starting with his memories of an idyllic home life and adoring parents captured in home movies, set against the backdrop of the Troubles.

At age 17, he began to document what he saw, photographing images considered at that time to be too stark and raw for publication. Bitterly disappointed, he threw the negatives into a plastic bag where they remained for over a decade before being resurrected for an exhibition in the National Library of Ireland.

This collection - ‘Melancholy Witness’ - is a valuable record of a time that Ireland has struggled to come to terms with. Now, we bring this body of work to a new generation for whom the Troubles that shaped this island have had little relevance.

Since his time at art college in London, Sean has exhibited widely in museums and galleries north and south of the border. As a complex and subversive social commentator, his compulsion to ‘fix the world through art’ would lead to IRELANTIS (1994-1997) - a playful photomontage series using John Hinde postcards to poke fun at Irish mythology.

Seán has amassed an incredible record of Irish life; 30 years of living history is scattered on the floor, strewn across chairs, jostling for space on tables. But even he admits that things have come to a head. As the date of Amy’s arrival draws closer, he embarks on a massive declutter with the support of friends, attempting to bring order to his life. But as he unearths 30 years of memories, he remains hamstrung by his inability to let go.